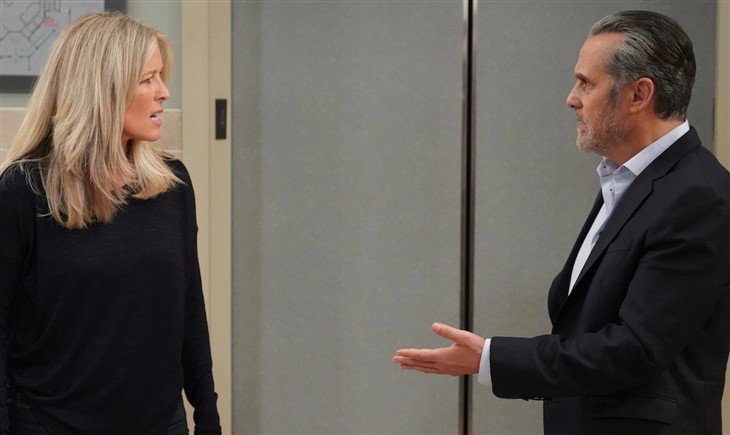 General Hospital (GH) spoilers reveals Carly Spencer (Laura Wright) sure knows how to drum up the most interesting relationships. Sometimes, she’s in the mood for something sweet, passive, and supportive; other times, she’s down for bad boys, banter, and angst. What gives? It seems like this gal has had trouble finding balance in one man, and thus, maybe she jumps around trying to find a happy medium. The two greatest loves of Carly’s life are undoubtedly Sonny Corinthos (Maurice Benard) and Jason Morgan (Steve Burton), but which one really makes her hot to trot?

Sonny and Carly have definitely become the premiere couple in Port Charles. Married and divorced four times over now, they know how to fight, and they know how to make up. Both their romantic hearts and their aggressive fighting sides know how to bring passion into play.

Sonny and Carly are the couple everyone knows will go home and make up in private, and the fights they have make the making up that much better. Some joke that they’ve married so many times only so they can break up to make up. The difference with Sonny is he doesn’t actually know Carly inside and out even still after all these years. Not like Jason does anyway.

Jason and Carly were actually friends — and more than friends — before Sonny meant anything to Carly. It was actually only in Jason’s absence that Carly fell for Sonny. Jason is Carly’s best friend, and likely her real soulmate. He doesn’t fight her. Rather, he supports her. These two can finish one another’s sentences, and yet they are never boring. The sparks still fly between them like they just met. Jason’s undying ability to ride in like a white knight and rescue Carly from harm — and often from herself — makes him appealing to Carly, who is otherwise known as a woman who needs no one. Jason would never try to make her feel like she’s less without him.

Often, the focus is on Sonny and Jason. Which guy is best for Carly? What are their qualities? How are they different? How does each of them best compliment Carly? The focus is rarely on Carly, which makes no sense because she’s the common denominator in both of these passionate relationships.

She’s the other half of this equation, and although she’s been with other men, those relationships — like Jasper ‘Jax’ Jacks (Ingo Rademacher) and Lorenzo Alcazar (Ted King) — didn’t have the same chemistry with Carly. For her, Sonny and Jason are the best of both worlds, but while she’s been comfortable being both Jason’s friend and his lover, she’s never really been okay with being just friends with Sonny. That is telling. Which relationship is more passionate in your opinion? Let us know, and keep checking back with us for more General Hospital news and spoilers as they become available.