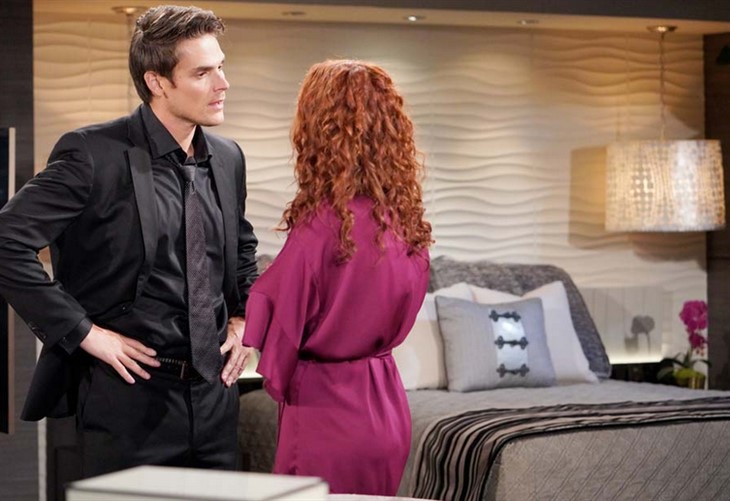 The Young and the Restless (Y&R) spoilers for Wednesday, November 30, 2022, reveal Adam giving it the old college try with Sally once again.

The Young And The Restless Spoilers – Will Adam Newman Step In It Again?

Sally Spectra (Courtney Hope) is in distress — specifically professional distress. She can’t seem to find another job, but perhaps she wasn’t qualified for the one she just had. When Adam Newman (Mark Grossman) finds her at Society, she is not in a good mood but he sits down anyway to try to explain his drunken proposal last week.

Adam apologizes for doing what he did in public, but he still contends that he and Sally belong together and Nick Newman (Joshua Morrow) is just using Sally to pass the time whether he wants to admit it to himself or not.

Sally doesn’t want to think of it that way, but she is still torn. She has to admit she still has feelings for Adam so they decide to take this conversation private, which means just about anything can happen.

Things have been tense as they usually are between Billy Abbott (Jason Thompson) and Lily Winters (Christel Khalil), especially with all the attention he is paying to Chelsea Lawson (Melissa Claire Egan) since she tried to kill herself. Lily has been trying to live with it, but that doesn’t mean that she likes it.

However, they are still determined to make this ill-conceived relationship work so they come to a new understanding. With Daniel Romalotti (Michael Graziadei)back in town, how long will this even last? Daniel and Lily were definitely thrilled to see one another seem to get along better than Billy and Lily ever have.

The Young And The Restless Spoilers – Nate Hastings

Nate Hastings (Sean Dominic) is still high on corporate life and doesn’t understand why Elena Dawson (Brytni Sarpy) isn’t as high on life and happy as he is. In fact, he goes so far as to accuse her of being disloyal.

Well, Nate is one to talk considering how he betrayed his own family for his own ambition. Perhaps Lily and Devon Hamilton (Bryton James) should have a word with him about what loyalty really means.