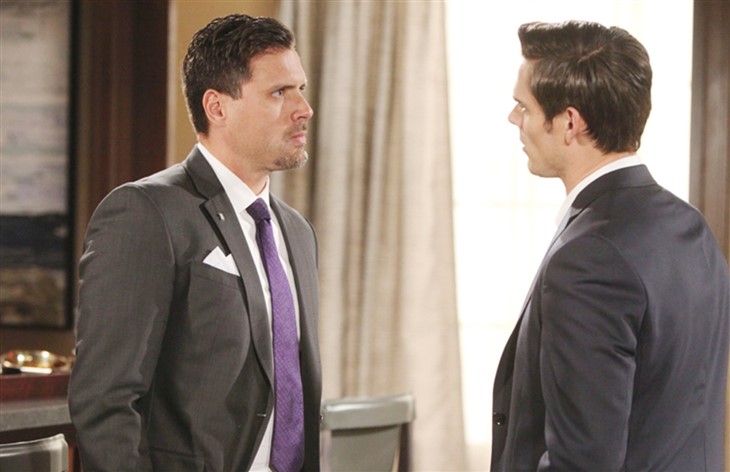 The Young and the Restless spoilers document that an unlikely trio is set to defend Victoria Newman Locke (Amelia Heinle), who seems hopelessly lost in love. Teasers indicate that her husband will attempt to deflect from his latest cowardly lie being exposed. But that attempt will not hold weight for long.

Ashland Locke’s (Robert Newman) revealed cancer lie arms Victor Newman (Eric Braeden) with the ammunition he needs to blow a hole through his distrusted and now, unwanted son-in-law’s facade. But the Moustache is not the only one who wants Ashland gone.

The Young And The Restless Spoilers – Brothers On Same Side Again

Adam Newman (Mark Grossman) and Nick Newman (Joshua Morrow) buried the hatchet last year. Nick’s trip to the farm in Kansas was coupled with violent weather. The brothers used that event to bond and start anew.

While Nick popped off about Victor favoring Adam during Victoria’s wedding in Tuscany, Italy, he has since reverted to his big-brother stance. Adam was starting to fall back into the comfortable pattern of condemning family matters but has found a new love.

While Sally Spectra (Courtney Hope) now realized influence over Adam’s outlook, he is maintaining family loyalty. It is not a strategy but is reflective of maturity.

Billy Abbott (Jason Thompson) is steadfast when it comes to Ashland. He sees Newman’s character as a charlatan.

The Lockeness Monster is a threat to Victoria’s well-being, with Johnny Abbott (Holden and Ryan Hare) and Katie Abbott (Sienna Mercuri) being impacted as well. The children’s presence at boarding school is the only issue Billy and Victoria agree upon these days.

So, Billy’s latest verbal joust with Ashland at Society’s bar was predictive. Billy reasserted his feelings and warning to Victoria. She sloughed it off as the ravings of a jealous ex-husband. While not fully off-base, Victoria’s blind-eye to Billy’s warnings came days before the Peruvian intel dropped.

Victor sees Adam and Nick’s sporadic angst as manageable issues. He needs both sons to be part of the coming fight against Ashland.

There are two very challenging aspects to this scenario. Ashland’s hold on Victoria’s heart and legal place within Newman-Locke.

Victor and Adam care about both issues. Nick and Billy want what is best for Victoria. As for what Ashland desires, that is worth the watch on Y&R.