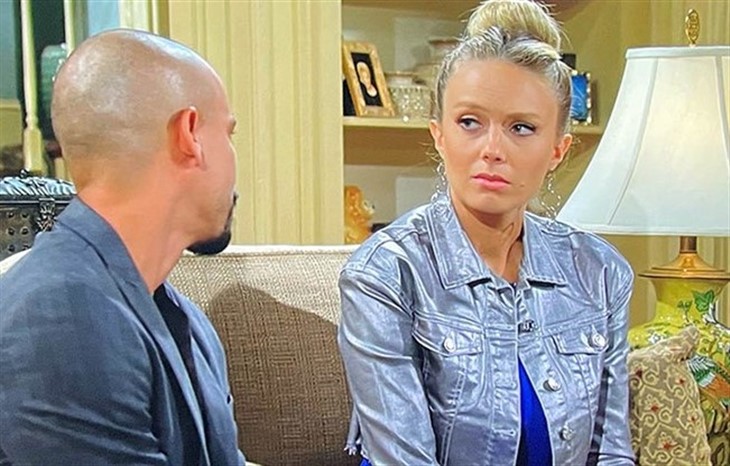 Dominic Newman Abbott Chancellor (Rainn and River Ware) was born through Abby and Devon’s genetics. Chance is purely Dom’s legal father. Mariah Copeland (Camryn Grimes) served as the surrogate but has no biological tie to Dom.

Yes, the above is a complex tale. A legal agreement should have been in place before the needed donation and surrogacy took place. Amanda Sinclair (Mishael Morgan) suggested that course of action. But Devon said no, which he now regrets.

Devon was moved by Chance’s admission that he has been struggling since his return from the horrific mission in Spain. Feeling guilty because of the deaths of his colleagues and abandoning his wife, Chance was hoping the return trip home would help to settle his mind. That has yet to happen.

Chance has unnerved Abby in recent weeks. His reveals to her about him not being able to handle fatherhood reflect insecurity, rather than the destiny he presumes.

But Devon’s awareness of Chance’s uneasy feelings made him take action.

Some of the most memorable scenes in this soap opera’s history have taken place in the living room at the Chancellor mansion. TPTB continues to honor the greatest actor (the late Jeanne Cooper, Katherine Chancellor) and character in Y&R’s history in many ways.

Katherine’s name has often been referenced through the years. Chancellor Park has existed in different forms, with the varied setting regularly presented.

The sit-down Devon had at his grandmother’s estate fitting took place under Katherine’s watchful eye, as her magnificent portrait hangs above the mantel in the fabled, referenced living room, which is the main room in the Chancellor mansion. Devon requested custody rights, with Chance telling him they would need to think about it.

The Young And The Restless Spoilers – Couple’s Decision Leads To Court?

Amanda’s new law practice telegraphs as serving Devon’s need for legal representation. He may not have to take Abby and Chance to court if some negotiated settlement takes place before what would be a messy battle ensues.

Y&R wants to explore where someone in Devon’s position has or deserves legally defined time with the child he helped to create. So, that establishes the compelling storyline that is now unfolding.

This site is a leading source for everything linked to The Young and the Restless.