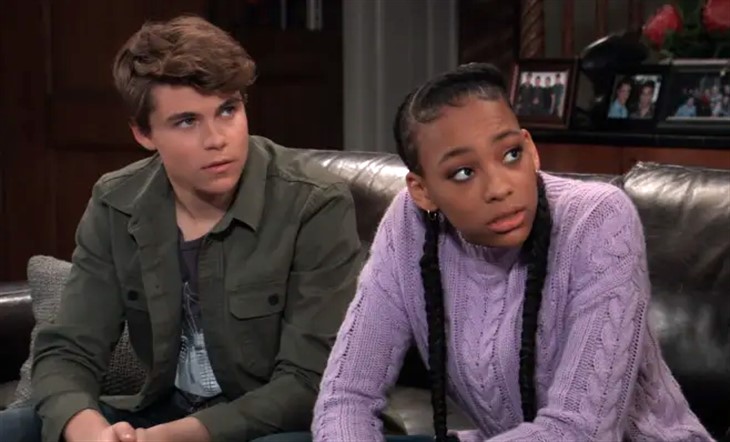 General Hospital (GH) spoilers tease that Cameron Webber (William Lipton) and Josslyn Jacks (Eden McCoy) have been struggling with when and if they should take their relationship to the next level by making love. Esme Prince (Avery Kristen Pohl) tried to make Joss feel insecure about their decision to wait a little longer until the time is right for both of them. But that doesn’t mean that Cameron isn’t frustrated, but his love for Joss is strong enough that he can wait.

Esme wants to put Joss in her place. Joss has made no secret of the fact that she doesn’t like Esme. She also doesn’t like how close Trina Robinson (Sydney Mikayla) is to Esme’s boyfriend, Spencer Cassadine (Nicholas Chavez). Esme was quite interested to discover that Cameron and Trina almost dated awhile back. During their trip out of town for a relaxing getaway, look for Esme to make a devious move. Perhaps she will spike Cameron and Trina’s drink and lock them in a room together. And then when Joss shows up, she will discover Cameron and Trina seemingly in bed together. Joss may leave without even letting Cameron and Trina know she was there.

GH Spoilers – Cameron Webber And Trina Robinson Will Wake Up Naked Together.

Not knowing that Joss had even been there, Cameron and Trina will wake up in bed together. Convinced that they made love, Cameron and Trina will have to take a hard look at their lives and their feelings for each other. They will come to realize that any feelings they may have had for each other were long gone. Cameron has finally found love with Josslyn and Trina may have to finally admit she has feelings for Spencer. Not knowing for sure exactly what went on between them, Trina and Cameron will try to forget what happened, not knowing that Jos already saw them together.

But thanks to Esme, Josslyn will have spied Cameron and Trina together. Thinking her boyfriend and her best friend have betrayed her, Joss will be devastated. She will likely leave the dorm room she shares with Trina and return home. Esme will congratulate herself on a job well done, but Cameron and Trina will eventually remember that nothing happened between them. They will also realize that Joss may have seen them. So look for them to get Esme to admit what she did. But that will be easier said than done.

Will Esme succeed in pushing Cameron and Trina back together? Will she make sure to hurt Josslyn in the process? Will the teens realize that Esme set them all up? Anything can happen in Port Charles so stay tuned to General Hospital airing weekdays on ABC. And don’t forget to check back right here regularly for all your General Hospital news, information and spoilers!