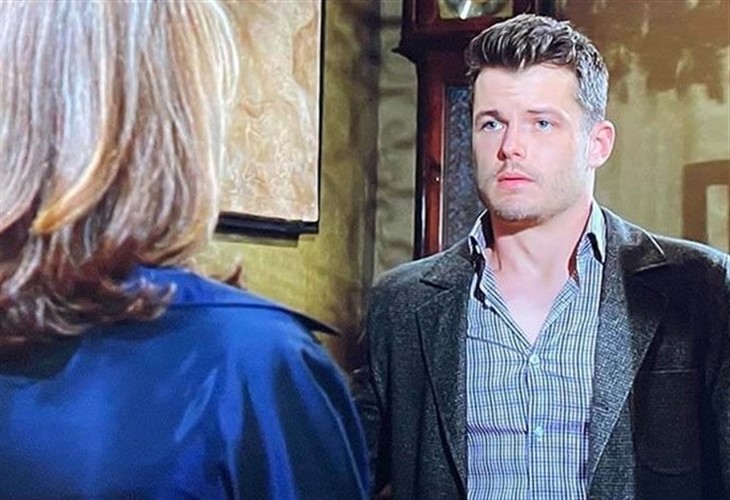 The Young and The Restless spoilers and updates tease that a lie will be exposed! Kyle Abbott (Michael Mealor) will be forced to pay Diane Jenkins’ (Susan Walters) hotel bill in an upcoming Y & R episode!

Previous Y & R episodes had revealed that Ashley Abbott (Eileen Davidson) wanted a financial report on Diane when they had the family meeting! Diane said she was doing well and she’d be glad to provide it, although there’s been no word that she has! She had bought Keemo Volien Abbott’s (Philip Moon) house in Los Angeles, and that was something anyway that should have shown some financial stability.

But when Phyllis Summers (Michelle Stafford) runs Diane’s credit card after evicting her from the hotel, preparing the folio, there’s a big surprise. Diane’s card is declined both ways, when she runs it on debit mode and credit; sounds like Diane’s financial stability was another lie!

Phyllis comes after Diane for the money and Diane acts properly offended that she thinks Diane is a deadbeat, especially after Phyllis was the one who evicted her! She’s not giving Phyllis another card to run the charges on, she claims she wouldn’t even if she had one – she’s not one to use different credit cards like some people!

One credit card is plenty for Diane and that’s a big red flag to Phyllis- now she’s sure she’s after Jack Abbott (Peter Bergman) and the Abbott money! Who doesn’t have at least five credit cards and two or three bank accounts? Diane calls Kyle Abbott (Michael Mealor) and asks him to bail her out with Phyllis, there must be a problem with her bank!

It’s not like Phyllis comes after Kyle to pay his mother’s bill-but when Diane comes to him for help he does feel financially responsible for it, and for her! After all, this is his mother that perhaps stiffed his mother in law for staying at her hotel for an extended stay!  Diane had planned to stay for an indefinite period of time and that card may not have been run for several months had Phyllis not evicted her!

Kyle feels a little put upon but he tells Phyllis he wants to pay the bill – even though Phyllis advises him not to! She thinks it’s just a ploy to get the Abbott money and that Diane is trying to get to Jack!

Kyle finally convinces Phyllis to let him pay the bill but little do either one of them know what Diane did – Diane lied to Phyllis about only having one card. Diane is just fine financially and could have paid with another card, but she got mad when Phyllis evicted her! Diane cancelled the card simply to stick it to Phyllis where the sun don’t shine but she went to Kyle to pay her bill to maintain the lie! Phyllis is more than likely right about Diane – some things and most people never change!