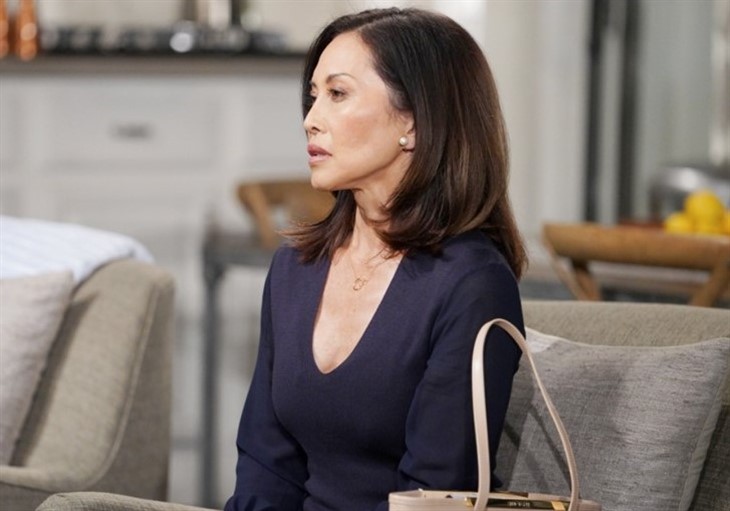 The Bold and The Beautiful spoilers and rumors tease that Li Finnegan (Naomi Matsuda) will be forced to seek Sheila Carter’s (Kimberlin Brown) help! Her comatose son’s kidney will fail and Sheila’s the only compatible donor-Li will be forced to tell the truth in upcoming episodes of BOLD!

Recent BOLD episodes revealed that John “Finn” Finnegan (Tanner Novlan) is comatose on life support with no brain activity. Oftentimes when a person is in that kind of situation some of their organs may fail, and usually they are taken off life support then. Li wouldn’t take no for an answer – when he was brought into her hospital instead of the one Steffy Forrester Finnegan (Jacqueline Macinnes Wood) was taken to.

Li didn’t take the word of the paramedics that when there is no brain activity there is no hope. She signed the death certificates and put her son on life support at home so she won’t take him off because of a kidney failing!

Li knows that she can’t just do a kidney transplant at home, but she can look for a donor even if she has to take Finn to yet another hospital! She knows Jack Finnegan’s (Ted King) blood type and that he’s not compatible – she searches through organ donor lists and finds nothing, and she knows she won’t match either. She would donate one kidney if she were a match although she would have to fake Finn’s identity and medical records; Hayes Finnegan (Piper Harriot) is much too young to donate. Li can set up daily dialysis at home the same way she’s set up life support, but Finn needs a kidney! Dialysis can only work but for so long!

Li does what she has to do to keep Finn alive, and sets up at home dialysis but continues the donor search as well. There has to be someone on the planet who could donate – maybe one of his half-sisters? – but how does she find them, and what are their names? She doesn’t want to raise suspicions by asking too many questions of the Forrester family even though they might know.

She knows that Sheila had one daughter by one of Taylor Hayes’ (Krista Allen) psychiatrist friends James Warwick (Ian Buchanan). She has another one who is Ridge Forrester’s (Thorsten Kaye) half-sister, but she doesn’t want them to wonder why she’s asking how to contact the half-sisters!

Li is forced to reach out to Sheila for help, but she is in a real bind! She doesn’t want Deputy Chief Bradley Baker (Dan Martin) to know she illegally signed Finn’s death certificates! Falsifying a death is a crime too, but how is she going to find out if Sheila’s a match otherwise? She finds out she knows someone who works in the prison infirmary and goes from there – she has to lie some more and fake some patient papers. She manages to get her person inside to find out Sheila’s a match – now she has to talk her into donating and not exposing Finn’s survival!

The Duggars Upset By their Adult Daughters’ Wardrobes