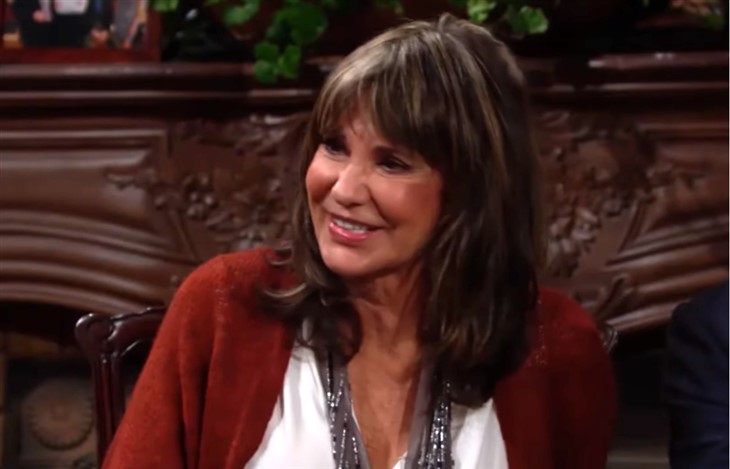 The Young and the Restless (Y&R) spoilers for the week of October 3, 2022 tease that the drama will be hot and heavy when a daytime vet returns to town to find her company is being chipped away at from the inside out. Expect storm clouds to appear as the day of reckoning arrives for Chancellor-Winters!

The Young And The Restless Spoilers – The Week Of October 3, 2022 Brings News Of A Business Maven

Jess Walton is back in Genoa City, Wisconsin as veteran character Jill Abbott. The daytime legend confirmed the news on her Instagram, posting a video of herself in the studio’s parking lot, and a picture with her onscreen son Jason Thompson (Billy Abbott).

Walton also included Christel Khalil (Lily Winters) in the fun: “@christeladnana has been my Daughter-in-law for many, many years. She has been with two different ‘Sons’ of mine: both Cane [Ashby, Daniel Goddard] AND Billy. As a side note Jill always liked Lily, but Lily never liked Jill until Jill made her CEO of Chancellor!”

The Young And The Restless Spoilers – The Week Of October 3, 2022 Sees Genoa City Population Increase

Walton posted this about Thompson: “Working with @myjasonthompson is like butter. Because he reminds me so much of my own son. When I need emotion, it’s right there. Tears etc. When I need impatience, it’s there. When I need anger…there. it really is effortless❤️”.

Jill has her work cut out for her because in her physical absence the minions have been running wild. Nate Hastings (Sean Dominic) has gone to the dark side by hatching a plan with Victoria Newman (Amelia Heinle) to buy out C-W.

What is he thinking?! His problem is that he is not thinking, he is responding to his ego being bruised as Devon steps all over it without any qualms. These two alpha males have been going at it like crazy, and now the ish is about to hit the fan, just in time for a fierce mama bear to come back and swat the cubs back in line.