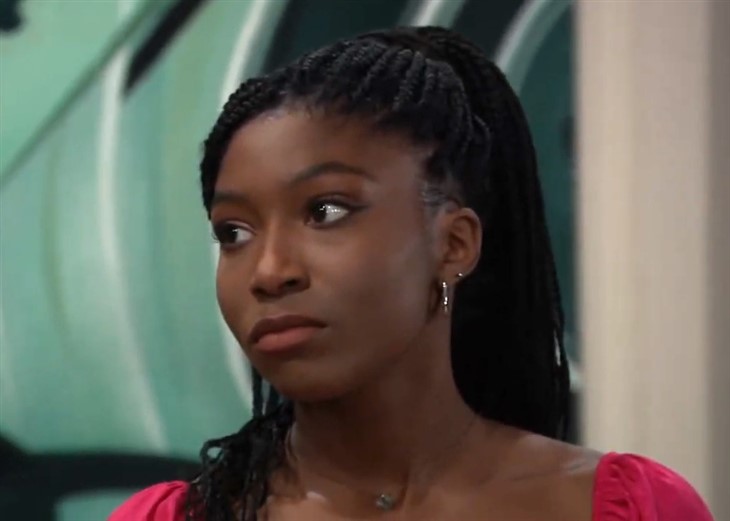 General Hospital spoilers and updates for Thursday, June 30 tease there’ll be some obvious observations on the next GH!

General Hospital Spoilers  – Now Would Be The Time

Trina Robinson’s (Tabyana Ali) court date is quickly approaching and her trial with it, and she tells Curtis Ashford (Donnell Turner) she needs to do something – now! Trina has many people on her side who are trying to help, but she needs something that will quickly exonerate her from the frameup by Esmé Prince (Avery Kristen Pohl)! Curtis, Officer Rory Cabrera, (Michael Blake Kruse) and her father, Marcus Taggart (Réal Andrews) have all been looking for the key to her freedom!

Meanwhile, Esmé spots a suntanning Rory in his swim trunks at the Metro Court Pool, trunks and flirts, seemingly blinded by his six pack! Rory might consider what she’s saying to him as the lamest pick up line ever, as she says if she were a cop she’d pull him over! That almost sounds like a bad dad joke, but then she’s got a pretty bad dad who isn’t joking, unbeknownst to Rory! What Rory does know is she’s the chick the bartender he’s looking for identified as buying the hot phone, and he might try a little undercover practice. Esmé would likely prefer under covers practice then Rory trying to get her to confess to him but it’s worth a try! Rory is firmly team Trina and looking for something to exonerate her!

Samantha McCall (Kelly Monaco) looks for all the world like a mother with eyes in the back of her head snagging her errant toddler as she grabs Damian Spinelli (Bradford Anderson)! She tells her former business partner that he’s not going anywhere, and he looks guilty as she is determined to see what kind of cookie jar he’s gotten his hands into! Spinelli has been acting and dressing very non-Spinelli like lately and every time she’s asked what he’s up to, he’s dodged her!

He has indeed been acting strange and avoiding fair Samantha, even making up a not so convincing cover story when she and Dante Falconeri (Dominic Zamprogna) saw him arguing. This was in the Metro Court, and he claimed he was dealing with a persistent bill collector!

GH Spoilers – Something To Tell You

Willow Tait (Katelyn MacMullen) was taken to General Hospital after she fainted at the Metro Court pool in front of family and friends. Liesl Obrecht, (Kathleen Gati) Nina Reeves, (Cynthia Watros) and Sasha Gilmore Corbin (Sofia Mattsson) were there and Sonny Corinthos (Maurice Benard) caught her. Sasha and Michael will reconnect after Willow tells Michael her news, possibly for Sasha to help Willow with her diagnosis. TJ Ashford (Tajh Bellow) had run some tests and although they weren’t all back in, the pregnancy test came back positive. Willow didn’t seem exactly thrilled, oddly enough and tells Michael in her hospital room she has something to tell him.

Cody Bell (Josh Kelly) and Dante Falconeri (Dominic Zamprogna) are having lunch when Cody sees someone and asks if they could tell “them” or should he! This might be Spinelli, who Sam may be dragging over to the table so she and Dante can get him to tell the truth about what’s going on with him! Cody does indeed have a connection of sorts with Spinelli, who went to an ATM and got him $500 after he was lurking outside Zelda Telesco’s (Kristin Carey) hotel room.

Dante and Sam will be surprised and the truth may be revealed about how they are both connected to Zelda, and Society Setups. They may both be in over their heads!

Spencer Cassadine (Nicholas Chavez) appears to have gotten himself in some trouble at GH after looking for some help from Brad Cooper (Parry Shen). Britt Westbourne (Kelly Thiebaud) has the phone in her hand as she threatens she’ll throw him out if he doesn’t leave in twenty seconds! Britt has taken issue with Spencer trying to get Brad to help him with something, and he’s obviously out of the loop about Brad. Brad has no access to the hospital lab anymore and hasn’t for years; perhaps he’s trying to get Esmé’s DNA tested for some reason!

General Hospital Spoilers – Can I Help You – Maybe!

Sasha Gilmore Corbin (Sofia Mattsson) is seen on the phone telling someone that maybe she can help them; she is very concerned about Willow. But she’s also got a television appearance coming up the next day, and may be trying to carve out some time to help her mystery caller. Sasha will be enduring several stressful situations herself in the next few days, and her good friend Willow’s medical condition doesn’t help. She may or may not be brought into the loop about Willow’s impending blessed event since it will bring up thoughts of her own baby!