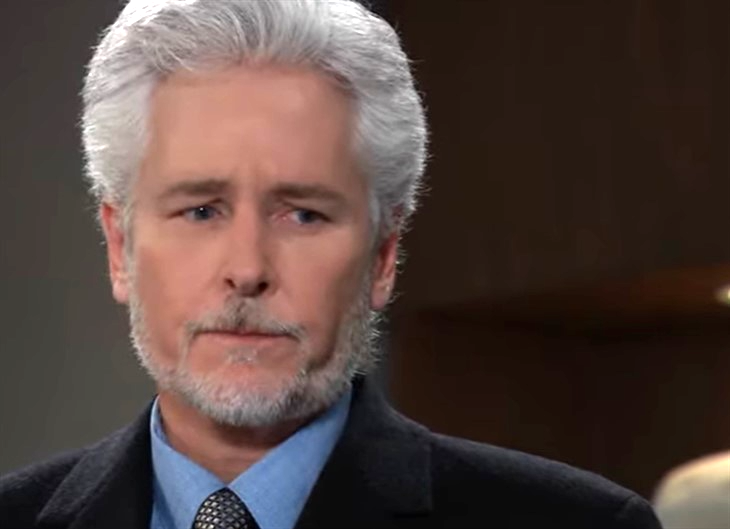 General Hospital spoilers reveal Peter August continuing to be one of the most hated characters in soap opera history and certainly the most hated on GH right now. And this is not a love to hate situation. This is a hate to hate, kill this character now code blue. And unfortunately, characters are being ruined at the altar of this villain. His latest victim may be Tad Martin Grey.

When GH first blessed us with Michael E. Knight as a smarmy lawyer with a southern fried accent (leading many fans to call him Southern Fried Tad), he was representing Nelle Benson (Chloe Lanier) and we knew he would do anything for money. Then, the show made us like him by giving him Valentin Cassadine (James Patrick Stuart) as a partner-in-crime/BFF.

When he turned out to be Laura’s (Genie Francis) half-brother, he finally had a connection to the main canvas and we were thrilled to have him, even seeing his softer side with Laura and his mother. But now, he’s been cursed with the horror that is Peter August (Wes Ramsey) and we don’t know why.

Why would Marty decide to take on a client like Peter, one Valentin hates, when he is almost about to lose Valentin as a client thanks to his new relationship with Lucy Coe (Lynn Herring). The man is a cold-blooded killer and not who Marty needs in his life right now as he becomes more of a part of the Port Charles scene.

Peter has already made Maxie Jones (Kirsten Storms) and Anna Devane (Finola Hughes) look like complete fools for way too long with both usually-smart women refusing to believe what a horrific and evil man he is — a chip off the old Faison block. He also made Elizabeth Webber (Rebecca Herbst) and Hamilton Finn (Michael Easton) look like bad medical professionals when they declared him dead when he was so clearly not. Why are intelligent and loved characters being sacrificed at the altar of Peter?

Now, Marty has taken him on as a client and the only thing that can make this work is if Marty just kills him, but nobody can seem to do that successfully. Stay tuned to General Hospital weekdays to see if Marty can take care of our Peter problem.