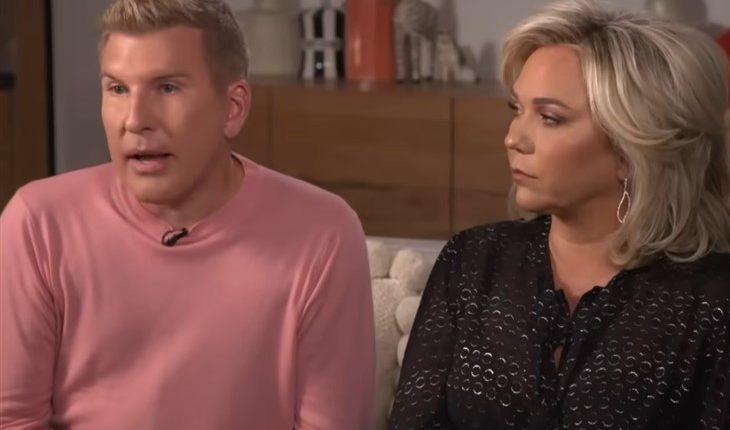 Chrisley Knows Best stars Julie and Todd Chrisley have broken their silence. The reality TV couple initially did not make any public statements after their prison sentences. But now both Julie and Todd decided to share their views.

And the Chrisley Knows Best stars say that their faith will help them when they move from their mansion to behind bars. Find out what Todd and Julie said. And get more details below.

Turning to their faith, Todd and Julie Chrisley shared their thoughts on their future. And though they face years in prison, followed by probation, the two avoided mentioning their convictions for fraud. Instead, the Chrisley Knows Best stars broke their silence by emphasizing their belief in God, noted Us magazine.

“Age is just a number,” said Julie, 49, during her Chrisley Confessions podcast. “And since we don’t know our death date, we have to live every day as if it’s our last.” After she shared that quote by author Priscilla Shirer, her husband Todd, 53, continued that theme.

“Yesterday doesn’t matter. Today is what we have. Tomorrow belongs to God, because we’re not promised tomorrow,” shared the Chrisley Knows Best patriarch. And he indicated his belief that God will help him when he goes behind bars.

Julie And Todd Chrisley Feels God Called Them To ‘Do Something’

Todd put the focus on his belief in God in his statements. And he shared, “What God calls us through, he will walk us through.” Both Chrisley Knows Best stars, who tied the knot in 1996, belief that their faith will help them survive their years in prison.

“God will call you to do something, and he’ll equip you to do it. He’ll give you what you need to do it,” stated Julie. But she also offered her views as a parent. “The difficulties I’m going through, how I handle it — [my kids are] watching that as well. If I handle it right, they’re watching, if I screw it up, they’re watching.”

As a result, the Chrisley Knows Best matriarch shared that she hopes to do “right more than I do it wrong. Because I know they’re watching.” And she offered a rather gloomy prediction for her kids’ future. “I know it will prepare them for difficulties, unfortunately, that they will have later in life.”

Todd and Julie co-parent son Chase, 26, daughter Savannah, 25, and son Grayson, 16. The Chrisley Knows Best patriarch will spend 12 years in prison. And Julie will stay for seven years behind bars. In addition, each spouse will serve 16 months of probation. The prison sentences stem from bank and wire fraud, tax evasion and conspiracy charges. They allegedly faked their earnings to banks so they could borrow more than $30 million.

Tell us what you think. How do you feel about Julie and Todd Chrisley’s reflections as they anticipate years in prison? And after you share your views, check back on our site for more reality TV news.