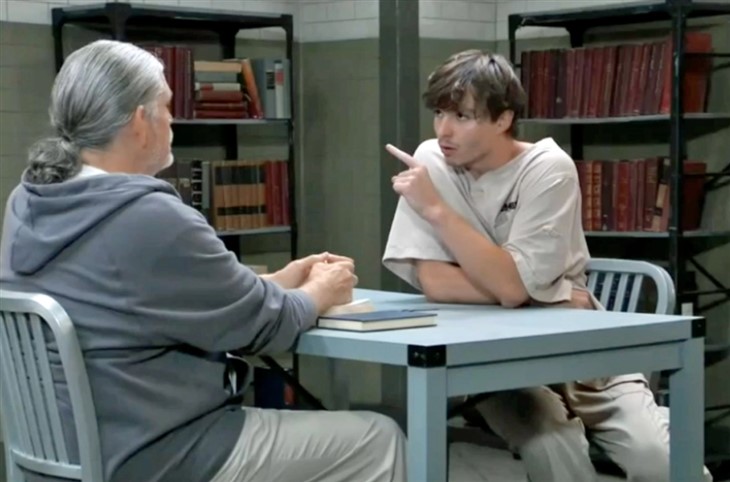 General Hospital (GH) spoilers tease Nikolas Cassadine (Marcus Coloma) has been hoping the time away in Pentonville would give his son, Spencer Cassadine (Nicholas Chavez), a little insight into what is really important in life — family. However, that’s not how Spencer is feeling about his dear old dad these days.

His sentence behind bars might be nearly wrapped up, but Spencer isn’t looking forward to coming face-to-face with Nikolas back at Wyndemere. So he won’t be pleased when Nikolas shows up at the jail to visit him. However, Nik’s visit is going to bring about another character’s interest, and Spencer won’t hate it.

When Nikolas shows up at Pentonville to visit Spencer, he’ll be as taken aback by his appearance as everyone else has been. Nikolas doesn’t look well cared for, but then, why would he? His clothes are too large for his frame and he’s not terribly concerned with how he looks for the other inmates. Nikolas can’t relate. From Spencer’s point of view, his dad has never really suffered the way he has, nor been held accountable in this way. This only adds to the heap of reasons Spencer has for not respecting his father.

Spencer is going to entertain his father’s visit, briefly, but he won’t like it. He might be a bit bored in Pentonville, and curious about what would bring Nikolas there when Spencer is due to get out of the joint soon anyway. Nikolas has come to talk to Spencer about settling their differences before Spencer is set to come back to Wyndemere. However, Nik might also suggest that it’s not wise for them to live together until they fix their relationship, which could throw Spencer for a loop. Will he grow suspicious and wonder if there are other reasons Nik wouldn’t want him around the castle? He certainly won’t be suspecting Esme Prince (Avery Kristen Pohl) has taken up residence there again.

When Spencer decides he’s done with the conversation, he’s done. He will walk out of the visitation room just as he did with Trina Robinson (Tabyana Ali), whom he was much happier to see. When Nikolas doesn’t take no for an answer, he just might receive another visitor while he’s there — Uncle Cyrus Renault (Jeff Kober). What will Cyrus have to say to Nikolas to get him to back off, and how might Spencer come to appreciate having his uncle in his corner? He won’t forget this when he leaves Pentonville, and Cyrus just may be relying on that allegiance. Stay tuned for more General Hospital news and spoilers just ahead.