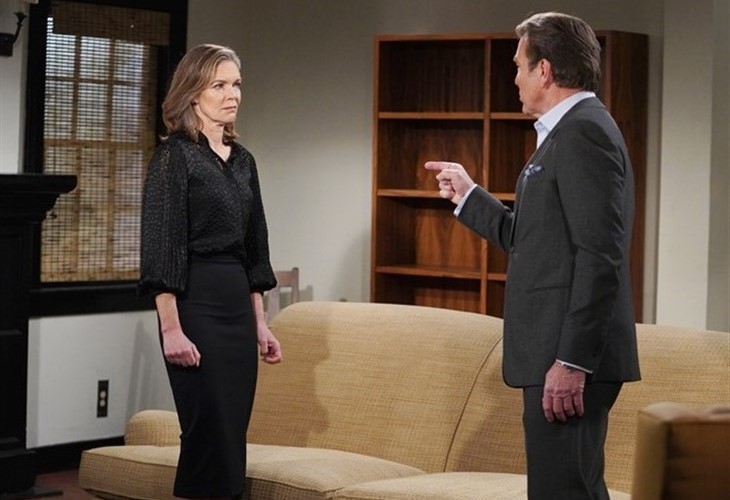 The Young and the Restless spoilers document that Diane Jenkins (Susan Walters) put a decorative item on the mantel of the home she just purchased. It was a framed photo that was approximately twenty years old. But the age of the captured image of herself, Jack Abbott (Peter Bergman), and their son represent more than nostalgia.

Diane’s statement with that photo is a reveal of her goal. She wants Jack back, with the conversation she had with Allie Nguyen (Kelsey Wang) reinforcing what is more than a daytime theory.

The Young And The Restless Spoilers – Deacon Sharpe Got A Corpse From The Morgue?

So, how could someone who was murdered in the park, that was later named in honor of Katherine Chancellor (Jeanne Cooper), be alive?

Deacon Sharpe’s (Sean Kanan) name was intriguingly entered into the dialogue. Diane said that he helped her by getting a corpse from the morgue. That explanation was a thin excuse, but soap fans know they are asked to believe such far-fetched stories. It is called suspension of disbelief, with the purpose being to push the plot.

While Diane’s supposed murder happened years ago, the Genoa City, Wisconsin’s, Coroner would have been able to determine that the corpse was not Diane. This implies that person was bribed without follow-up details being known.

Phyllis Summers (Michelle Stafford) knew by the sound in Jack’s voice that something was seriously wrong. She was staggered by his subsequent tell about Diane.

Stafford’s character is fiercely wonderful. She has the type of responsive mind that will realize Diane committed multiple crimes in faking her death and needs to be prosecuted.

It is nice that Phyllis has Michael Baldwin (Christian Le Blanc) as a best friend. A meeting with him needs to happen upon her return to Wisconsin to begin pursuit of legal matters, despite his plate being full with Victor Newman’s (Eric Braeden) recent big asks regarding Ashland Locke (Robert Newman).

The Young And The Restless Spoilers – Diane Jenkins Still In Love

Jack is a million miles away from loving Diane. But the patience she projected in playing dead for years indicates she is employing a long-game mentality.

According to what he told her a handful of months ago, Phyllis is Jack’s greatest love. So, how can Diane design a plot to split that reviving pairing and work herself back into Jack’s life and the Abbott family?

Kyle Abbott (Michael Mealor) served as Diane’s vehicle when he was a boy. It stands to reason that she will use that connection and her potentially developing friendship with Allie this time around on Y&R.