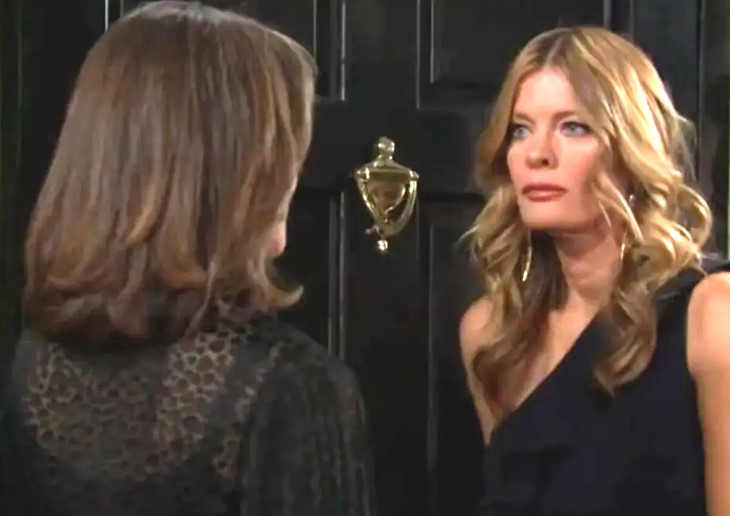 The Young and the Restless spoilers for Wednesday, April 6, 2022, reveal Phyllis Summers ready to put Diane Jenkins back in the grave, but she wouldn’t actually do that, right? Well, she came to LA and Jack had a lot to say. And those things shocked Phyllis.

Phyllis (Michelle Stafford) couldn’t believe her ears when Jack Abbott (Peter Bergman) told her it was Diane Jenkins (Susan Walters), a dead woman burning in hell, who had been stalking Jack and sending him texts. Yes, it’s Diane and no it’s not a trick. Somehow Diane is not dead. Phyllis thought Jack was losing his mind until Diane showed up right in front of Phyllis’ face.

Now, Phyllis has to do something about it because Diane is her worst enemy and is crazy and now Phyllis is terrified, so Phyllis takes matters into her own hands and pays a visit to Diane in Keemo’s old house that is now Diane’s new house. Will Phyllis want to finish the job that wasn’t finished when Maura West was playing Diane. She certainly doesn’t want this woman as her own daughter’s mother-in-law so she has to do something about it.

But will Phyllis get herself in more trouble than it’s worth when she confronts her old enemy, who was crazy once and seems to be crazy still.

Y&R Spoilers – Ashley Abbott As The Voice Of Reason

As for Ashley Abbott (Eileen Davidson), she still doesn’t believe that Jack should become more involved with sllie, his granddaughter in California. What does Jack even know about this girl? Shouldn’t he find out more about her than just a few things he already knows. What if she is dangerous and after something?

Ashley doesn’t even know the half of it. Wait until she finds out it was Diane Jenkins who led Jack to Allie (Kelsey Wang). That is a whole lot scarier than just a long-lost granddaughter. Someone is back from the dead and it’s a crazy person. They should all be used to this by now. Stay tuned to The Young and the Restless weekdays to see how these stories play out.

Days Of Our Lives Spoilers: Shawn’s Confession Is A Stunner