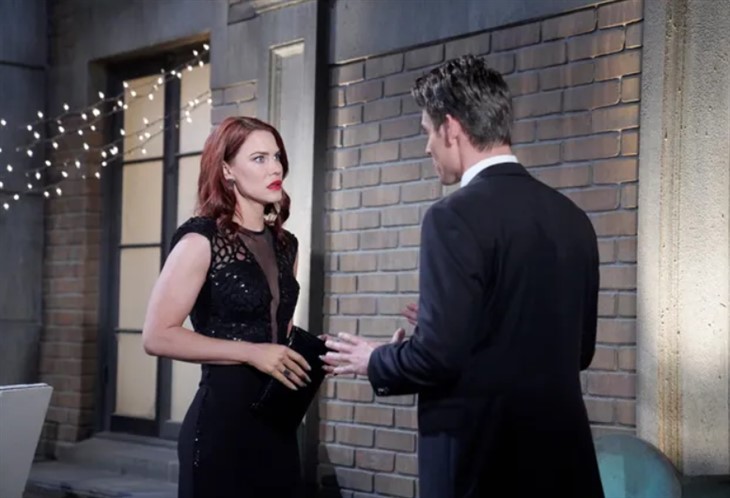 The Young and the Restless spoilers show that in a preview for this week, we see Adam Newman (Mark Grossman) ask Sally Spectra (Courtney Hope) to marry him! This comes after their rocky break-up and her sleeping with his brother, Nick Newman (Joshua Morrow)!

There is no denying that these two have been electric together and they absolutely should end up together, but we don’t think the writers are going to make it that easy, especially after everything that has happened. Sure, their getting married would be amazing, but they don’t want to give us that kind of payoff already. First, they must suffer more.

Sally is not going to suddenly decide that everything that has happened was okay, either. She remembers the pain that he has caused her and how he dumped her so she could keep her job. This entire situation is entirely his fault, and he never told her the truth. It doesn’t make much sense.

These two should have been dating the whole time and then Adam would not have to throw a hail mary at the last minute to try to keep her by his side. It would be a bit of a shock to see Sally say yes to this considering what’s happened, though, we have to keep it in the back of our minds, what if she says yes?

There is always the small chance that Sally would say yes and at that moment, I think the fanbase would jump up in excitement and start praising them. Sally and Adam deserve to be together and if it is as easy as Adam asking her to marry him, then we are good to go.

What would their wedding be like though? Would they keep it small or want to throw the biggest party ever? I hope that they just go down to the courthouse and don’t tell anyone to be honest. I understand that fans love the big, amazing weddings, especially since Adam is a Newman, but it would kind of be a slap in the face to his family if he did this quietly and without them knowing.

What do you think? Will Sally say yes or no to Adam and would you like to see them have a big wedding? Share your thoughts and remember to keep watching the CBS soap to see what happens next.