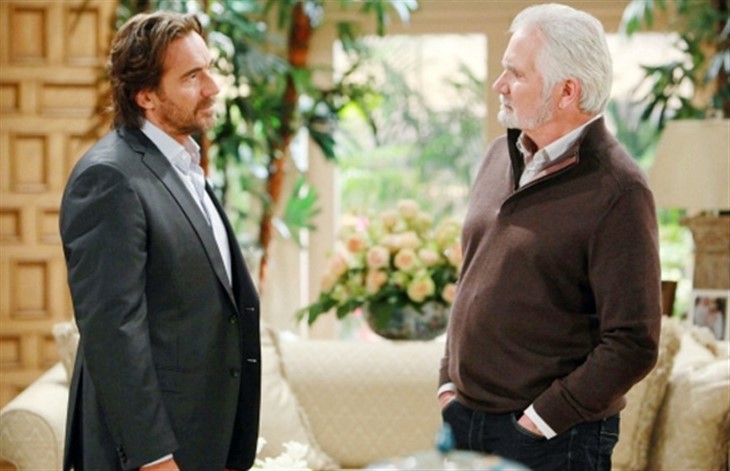 The Bold and The Beautiful spoilers and updates tease that Eric Forrester (John McCook) will push Ridge Forrester (Thorsten Kaye) back to Brooke Logan (Katherine Kelly Lang). He’ll chastise Ridge for his lack of loyalty and give him a well-deserved reality check, which should ensure a ‘Bridge’ reunion and remarriage.

The Bold And The Beautiful Spoilers – Ridge Forrester Ran

Ridge ran from his wedding, leaving Taylor Hayes (Krista Allen) confused and heartbroken, saying he had to go make things right. This was after the bombshell was dropped proving it wasn’t Brooke who called Child Protective Services, it was Thomas Forrester, (Matthew Atkinson). He was using a voice changer app on Douglas Forrester’s (Henry Joseph Samiri) phone, and Douglas confided it in his aunt Steffy Forrester Finnegan (Jacqueline Macinnes Wood).

Taylor knew right then that he’d waffle back to Brooke, but Brooke was tired of his waffling and put him on waffling probation. Later, Brooke came to the Forrester Mansion and encountered Taylor, who admitted she had done the same thing in Aspen and he’d swore up and down he wanted her.

B & B Spoilers – Ridge Forrester Did Apologize

Ridge did apologize to Brooke for not having faith in her, but it looks like he lost faith in Taylor over one delay in truth-telling. She was afraid to tell him she knew about the CPS call being faked because he’d drop her again and run to Brooke, even admitting it to her rival. For once in their lives they agreed on one thing concerning their mutual waffle and ex-husband and that he needed to choose one woman once and for all! Ridge isn’t used to romantic probation, and he told Brooke he needed some time to find out what and who he wanted. At the point when the two women came to an understanding with each other, no one knew where Ridge was.

The Bold And The Beautiful Spoilers – Eric Forrester Intervenes

Eric will make sure he keeps up with Ridge and gets updates, and he will agree that he needs to get his act together. It’s not fair, and hurtful, to both Brooke and Taylor, for him to continue to have a divided heart and tell both of them he will always love them. Eric might warn Ridge that he’ll lose both of them and any more chances at happiness and love with either of them, no woman wants to play catch with a man.

Eric has been through loving two women and having divided loyalties when he cheated on Quinn Fuller (Rena Sofer) with Donna Logan (Jennifer Garies). But ultimately, he made up his mind and made a quick choice when he literally got caught with his pants down, and he’ll push Ridge back to Brooke.

The Young And The Restless Spoilers: Jack Bribes Jeremy For Diane’s Safety, Will It Work?