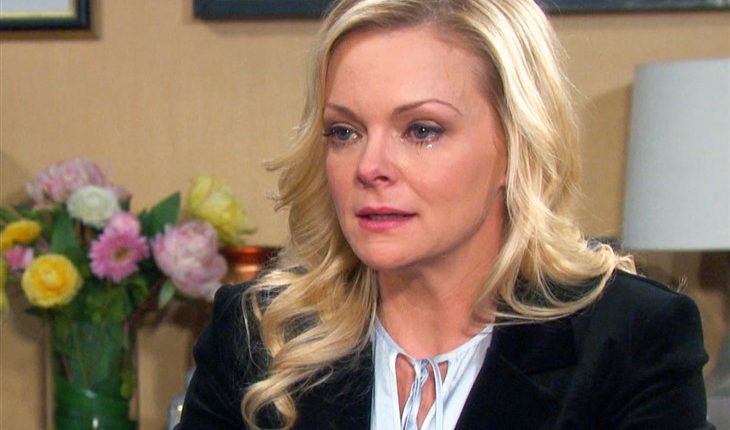 Days of Our Lives spoilers and updates tease that Belle Brady (Martha Madison) will be blindsided when Eric Brady (Greg Vaughan) is arrested! A belligerent Eric slugs a drunken EJ DiMera (Dan Feurriegel) and hires Sloan Petersen (Jessica Serfaty) to represent him which shocks Belle even more.

Eric is fresh from a huge fight to end all fights with Nicole Walker (Arianne Zucker) and Nicole ties one on with EJ, and they wind up in bed. Nicole had been an undue influence – although she denied it – on Jada Hunter (Elia Cantu) who aborted Eric’s baby, and the argument got very ugly. Eric said that Nicole had broken his trust and that was something they could never come back from, and particularly cruel given she knew Eric wanted a child of his own.

Eric is picked up and brought into the Salem Police Department after EJ presses charges for assault, even though the drunken EJ brought it on himself. Whether it be embarrassment or other reasons Eric doesn’t call upon his little stepsister, Belle doesn’t understand why he chooses Sloan.

Belle is representing Chanel Dupree (Raven Bowens) and likely represents Paulina Price (Jackeé Harry) who’s also arrested. The complainant in their cases is Sloan, and Belle is shocked that Eric retains the ambulance chaser and blackmailer to represent him in court. Of course District Attorney Melinda Trask (Tina Huang) could accuse Belle of a conflict of interest if she represents her older stepbrother, so there is that. But Belle is also shocked that the usually nonviolent Eric has been arrested for assault-even under the worst stress in the world Eric had always been peaceful. He must have been extremely pressed to react like that, even if she knows EJ can be a mean drunk-he’s extremely pressed as well with the death of his mother.

Belle understands why Eric was upset with Nicole and even more why he would be upset with Nicole responding by getting drunk with EJ and the two hitting the sheets. She’s heard from Brady Black (Eric Martsolf) that Eric was all excited about being a father and then found out Jada had aborted, apparently after being talked to by Nicole. Belle even understands why he might have lashed out at EJ who says some really stupid stuff when he’s drunk.

But what Belle will never understand is why Eric would hire someone like Sloan to defend him – he must know that he won’t win. But with just her, EJ and Sloan being the only lawyers in Salem, she has to admit he doesn’t have much of a choice.