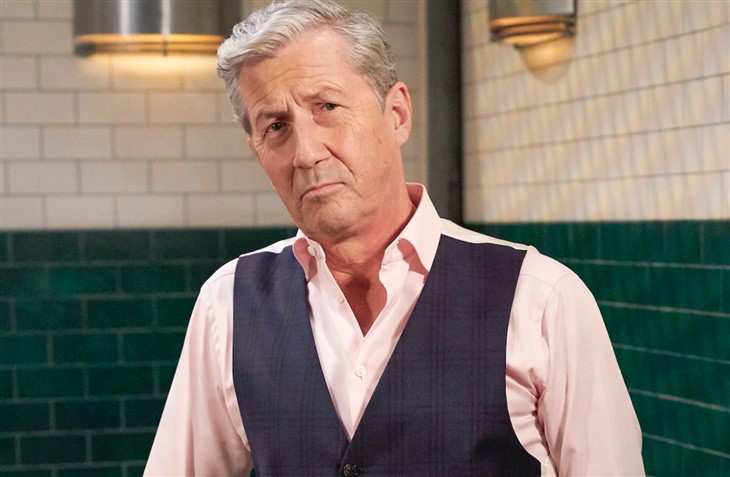 General Hospital spoilers reveals Victor Cassadine (Charles Shaugnessy) is a confident man who considers himself to be more intelligent than most. So he’s not to think twice about the assumption he’s made when he realizes Nikolas Cassadine (Marcus Coloma) has been spending time with Elizabeth Baldwin (Rebecca Herbst) on Spoon Island. Obviously, the goal is to keep Victor in the dark about Esme Prince (Avery Kristen Pohl) and the hostage situation Elizabeth is helping Nikolas to maintain. Thus, when Victor connects the dots and presumes something romantic is happening between Nikolas and Elizabeth, Nik isn’t going to rush to correct him.

Elizabeth has been back and forth to Wyndemere several times in the last week tending to her patient, Esme. While only Nikolas, some integral people on his staff, and Elizabeth know about Esme’s whereabouts, Victor’s decision to spontaneously move into the castle could jeopardize their plan — and land them in jail. What will happen if he finds Esme, and how will Nik and Liz keep him away from the north tower when they’re both hanging out there keeping Esme in check all the time?

When Victor told Nikolas he was interested in moving into Wyndemere, Nikolas balked and told him that it wasn’t a good time to take up residence there with the north tower being under massive reconstruction. When Victor notices Nikolas and Elizabeth sneaking off to spend time there together, he might jump to the wrong conclusion that they are having an affair. Of course, what’s an affair if he’s under the impression Nikolas and Ava Jerome Cassadine (Maura West) are getting a divorce? It could become problematic when Victor starts to realize Nikolas may not intend on seeing the divorce through. Why is he keeping Elizabeth around then?

General Hospital Spoilers — Nikolas Cassadine Takes What He Can Get

When Nikolas realizes Victor thinks he’s having an affair with Elizabeth, he’s going to let him think that. The truth is, it only benefits Nikolas for Victor to assume he knows all that Nik is hiding is a romance with his old friend — and not a baby with his son’s ex-girlfriend who is being held hostage in their home. Elizabeth isn’t going to be happy when she finds out the impression Nikolas had given Victor though, and it could spell trouble for her fledgling relationship with Hamilton Finn (Michael Easton). Stay tuned for more General Hospital news and spoilers to see how this story develops.