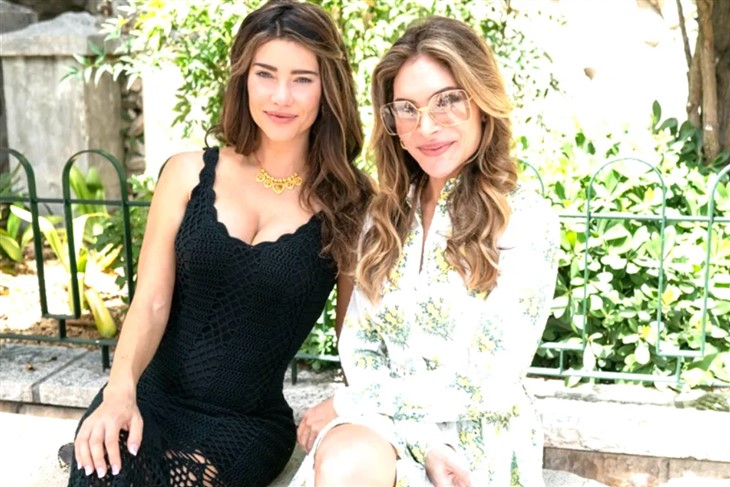 The Bold and the Beautiful spoilers show that Ayda Field will be guesting on the show as a mysterious new woman! Field will return to the world of soaps after she ended her story as Angela Moroni on Days of our Lives over two decades ago!

Speaking to Soap Opera Digest, Field told them, “I miss my soap days. It’s always been a really warm spot in my life and it was fun to revisit it. It was a kick for me and I brought my mom and my daughter Teddy to set with me, so it was really great to share this part of my life that has meant so much to me.”

From her interview, we know that she will be joining the cast as a French woman named Cecile. She is thrilled that she will get to speak French and while there is still much mystery, Field teases, “We kept kind of saying it was a TOUCHED BY AN ANGEL moment. I was able to channel Cecile in the most fabulous French way in a beautiful setting, with a cast that I instantly clicked with…”

Field was thrilled not only to be joining such an exciting cast but to be able to reconnect with Jacqueline MacInnes Wood (Steffy Forrester) saying that the moment was very meaningful, “She and I had shot together years ago, and it was quite an impactful thing. I had been offered a job in Istanbul and it just happened to be the two days that I had off, and it felt like this real calling to do the show!”

The Bold And The Beautiful Spoilers – Field And Wood Had Previously Appeared Together On ‘Party On’ A Travel Show That Premiered On E! In 2014.

The big question is who exactly is Cecil and why will she be heading to Los Angeles to hang out around the Forresters and Logans? With such high praise of Wood, we wonder if she will be a friend/mentor of Steffy who reached out to Cecil after she believed that John ‘Finn’ Finnegan (Tanner Novlan) had been killed.

Either way, we anxiously await to find out who this mystery woman is and what kind of an impact she will have on the story. Look forward to seeing you Ayda!

What do you think? Who do you think Cecil could be and are you looking forward to seeing Ayda Field return to Daytime? Let us know in the comments below.