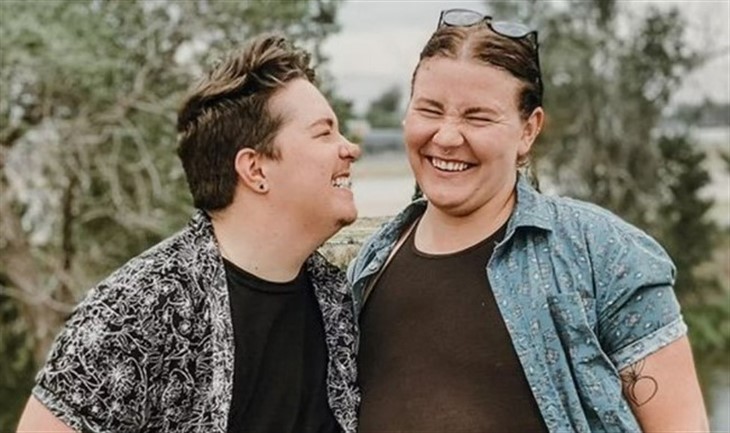 Sister Wives fans miss seeing Audrey Kriss and Leon Brown (Moriah) on TLC. Actually, they have a good story to tell on their journey together. So, some people wouldn’t mind a special that’s all about them. These days, the trans couple are seen as role models and a lot of people admire them. This week they posted up a clip that showed them getting into some PDA. And, many people loved the adorable relationship.

Sister Wives – All The Updates On Audrey Kriss & Leon Brown

If you missed the news about Audrey getting top surgery, you might have seen the follow-up post that was shared on Instagram. It’s been just over a year since the surgery and they couldn’t be happier. Actually, folks really love that look of Audrey now. The mustache and the obvious progress of the transition inspire others to find their real selves.

Sister Wives updates revealed that the couple relocated to Denver after Pride Month this year. They said that they really loved the place when they checked it out. And that was mainly because the place has a really good vibe for LGBTQ+ people. While the news comes on social media, many people just wish that they could see more of their story on TLC. However, there’s been no hint that they might be filming.

Leon took to Instagram to share a clip of themselves in a car park. Actually, it looked like they were at a shopping center. The caption said, “my sweetest symphony. life with you truly is so sweet.”  Clearly, these people are very much in love, and they seem totally right for each other. Actually, Leon had been unhappy in the past, but since they got engaged, most often, photos show them smiling.

Sister Wives fans who saw the PDA noticed that they sweetly kissed each other, So, some of them took to the comments to express their happiness for them. One of them wrote, “You two look so happy together❤️.”

Meanwhile, another fan mentioned how “😍Sweet” they seemed to be. For other folks, the fact that they share this part of their journey seems extra special.

One person said, “I feel like it has been a honor to watch you two grow & love. Thank you for allowing us in. ❤️.”

Sister Wives fans waited very patiently for the couple to announce their wedding. They seem to just about sparkle with love. The only thing that gives TLC fans any hope, is that Audrey Kriss once said that they won’t speak about her wedding just yet. Hopefully, that’s because there’s an NDA at the moment.