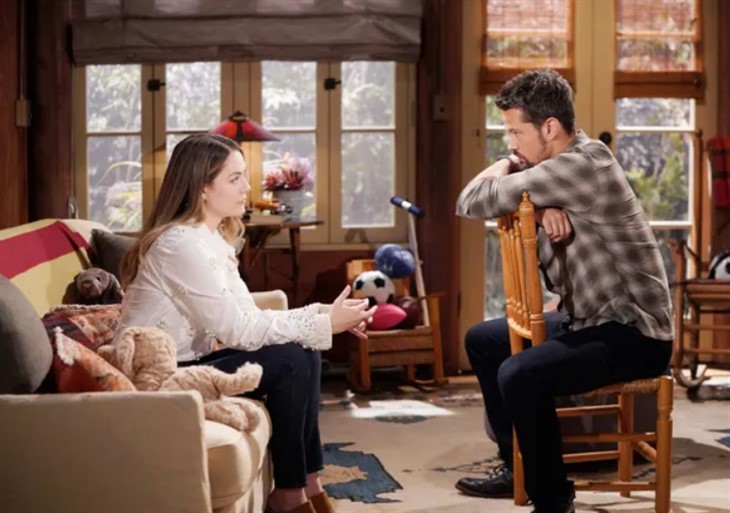 The Bold and The Beautiful (B&B) spoilers and updates tease in this week’s Soap Opera Digest that Thomas Forrester (Matthew Atkinson) and Hope Spencer (Annika Noelle) will bond anew. It won’t be romantically, though; it’ll be over common ground regarding Douglas Forrester’s (Django Ferri) welfare.

The Bold And The Beautiful Spoilers – Douglas Forrester’s Ok

It is very important to Thomas to make sure that Hope knows that even though someone, he doesn’t say who, called CPS that Douglas is ok. He wasn’t negatively affected by the social workers’ visits although it was a little awkward as Douglas has just finished beating Grandpa Ridge Forrester (Thorsten Kaye) at a game of chess. Ridge was with Douglas by himself when the social workers showed up with Thomas coming home right after they arrived.

Hope herself has been irritated by her mother’s constant haranguing of Thomas, because she can see for herself he is not the scary Thomas they once knew. He doesn’t name Brooke Logan Forrester (Katherine Kelly Lang) as the caller but he can tell Hope is thinking her mom was the caller.

B & B Spoilers – They Talk About Parenting Skills

Hope and Thomas actually get into an unexpectedly favorable discussion about each other’s parenting skills, and how they are complimenting each other. They talk about ways to communicate with each other better and how to make progress. Neither of them want that constant Forrester versus Logan battle to affect Douglas that they both lived through for years, with his father waffling between her mother and his. They both want Douglas to be healthy and happy and secure and are in one hundred percent agreement on wanting what is best for Douglas. Thomas knows that he had some very serious problems in the past and has worked hard to overcome them, and Hope believes him; she can see it.

The Bold And The Beautiful Spoilers – Hope For The Future

Both of them have hope for the future, talking about their co-parenting Douglas, not Hope’s clothing line and being successful co-parents. They may need to work out time for each of them to have Douglas to themselves at different times, but it is difficult with all the interference. The last thing they want is for the boy to be forced into a choice between them, which both Brooke and Liam Spencer (Scott Clifton) seem to be doing.

Hope encourages Thomas on his success, his progress, and being a good dad who loves his son with all his heart. She will support him in any way she can because she knows Douglas loves him too.