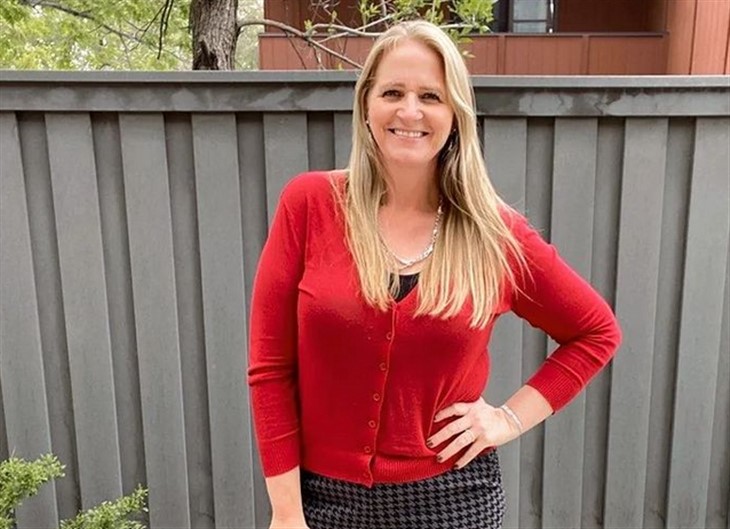 Sister Wives spoilers and updates reveal that Christine Brown isn’t feeling down in the dumps about her move from Flagstaff. Change is not easy, especially when it involves leaving a partner, and she seems to have coped very well. This weekend, when she shared a photo of herself out and about, TLC fans were struck by her appearance. Indeed, they agree that she seems to have found the happiest place that suits her just fine,

When fans saw Kody and his third wife in Season16, she seemed terribly stressed and hurt. In fact, she described the way Kody treated her like a “basement wife.” Additionally, he rejected any intimacy with her However, she seems to have found the support of her adult children since she packed her bags. Utah brings the close company of her daughters, Mykelti Padron and her son Paedon. Plus, Aspyn lives close by.

Sister Wives fans seem to feel a lot of vicarious happiness for Christine Brown. For once, TLC produced a star that not many people could troll on. Admittedly, sometimes fans slap at her for promoting health products, but the major of critics seem to have to scratch for nasty comments. Whilst her cooking show special wasn’t stellar,  she found a lot of popularity. Additionally, she soon racked up plenty of followers on her TikTok.

Christine Brown shared a photo on Instagram on Sunday, May 29. She wore a casual outfit, with comfy shoes and denim jeans. Rocking her shades, she walked along next to her grandchild, Avalon. These days, Mykelti’s daughter walks very well, and fans agree she’s just the cutest little kid. Obviously, the family decide on an outing, and it looked like they enjoyed a great time. In her caption, Kody’s ex said, “There is no other place I would rather be.”

Sister Wives fans might think that meant she was happiest out walking. However, judging by her overall appearance, she probably meant that she found happiness with her grandchild, Utah, her family, and way less BS in her life. In the comments, fans talked about how young and healthy she looks. While some critics accuse her of peddling “snake oil,” whatever the products do, they seem to work for her.

One Sister Wives fan said to Christine Brown, “You look terrific! Can actually feel your happiness in this picture! Yay you!”

This comment also arrived: “You are looking so vibrant these days ❤️.”

One of them read, “you look amazing you look soooo much happier enjoy every minute of your grand babies xx.”

B&B Spoilers: Steffy’s Despair Leads Her To Change Her Life