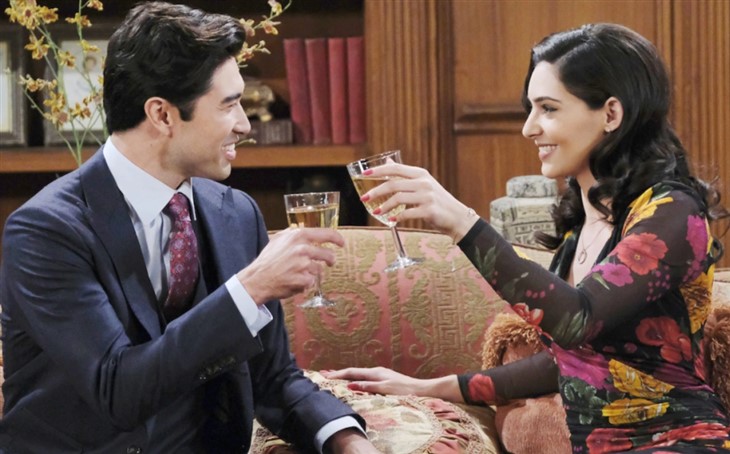 Days of Our Lives spoilers reveal that Li Shin (Remington Hoffman) and Gabi Hernandez (Camila Banus) have begun a romance. However, “Jabriella” will eventually get back together. During an interview, Hoffman said that Gabi is Li’s dream girl, but he doesn’t consider Jake DiMera (Brandon Barash) a threat. Underestimating Jake and Gabi’s bond could be a mistake.

DOOL spoilers reveal that Li mentioned he had been a huge fan of Gabi for a long time. By “fan,” Li means he’s had a crush on the DiMera Enterprises CEO. However, Gabi has been with Jake for a while. At least, until recently. So, that made Gabi unavailable.

Speaking to Soap Opera Digest, Hoffman explained that Gabi is Li’s dream girl. However, Wei Shin (Michael Hagiwara) wants Li to meet and marry a “nice girl.” Gabi is far from a good girl, so the relationship probably won’t get Mr. Shin’s approval. The fact that Li finally has a chance with Gabi is a dream come true for him, though.

It is clear that Jake and Gabi aren’t really over one another. After Gabi’s night of passion with Li, she dreamt of Jake. Meanwhile, Jake got intimate with Ava Vitali (Tamara Braun). However, the person consuming Jake’s thoughts was Gabi.

The night after Li and Gabi’s passionate encounter, things took an interesting turn. Gabi’s body language and facial expressions suggested that she considered it a one-night stand. However, Li viewed it as the beginning of a real romance.

Since Gabi wants to make Jake jealous, Li’s romance came at the perfect time. Of course, that’s not Gabi’s only reason for dating Li despite her love for Jake. Gabi knows that Li can be a powerful alliance, especially as others try to boot her from the CEO position.

Days of Our Lives spoilers reveal that Li doesn’t view Jake as competition. In fact, Li isn’t worried about Jake getting Gabi back at all. Hoffman told SOD that Li views Jake as a “fun obstacle.”

“Li’s pushing for it [a relationship with Gabi]. He’s enthralled with Gabi and just sees Jake as a fun obstacle. If she has feelings for Jake, it doesn’t matter because he’s going to win her over. He’s going to get the girl of his dreams.”

Even though Li will do everything in his power to woo Gabi, he could end up brokenhearted. It also seems as if Li might be underestimating the connection that “Jabriella” shares.

Jake and Gabi have been through obstacles before. They have also broken up before. Despite everything, they always end up reuniting. Will Jake and Gabi realize that they are meant to be before it’s too late? If and when that happens, who will Ava and Li be paired with next?