B&B Spoilers: Steffy’s Despair Leads Her To Change Her Life 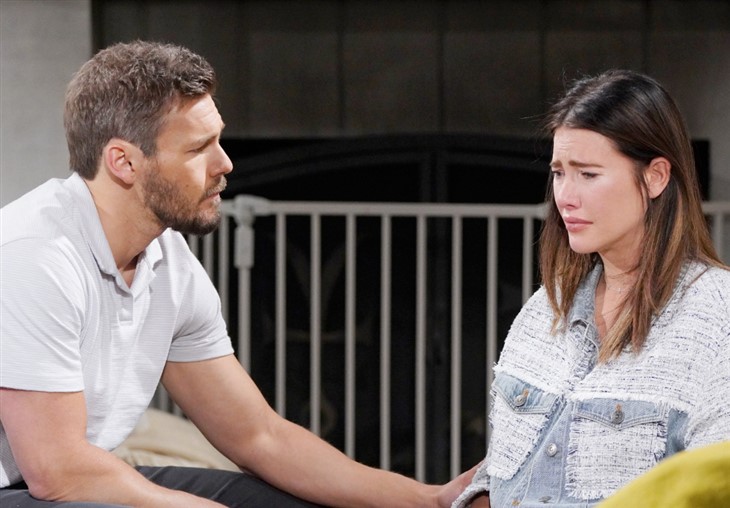 The Bold and the Beautiful (B&B) spoilers for Tuesday, May 31, 2022, reveal a distraught Steffy knowing she has to make a bold move for her own sanity.

The Bold And The Beautiful Spoilers – Steffy Forrester Makes A Decision

Steffy Forrester is still reeling from everything that has happened to her of late. She watched her husband step in front of a bullet for her and then she thinks she watched him die before being shot herself. After brief amnesia, she is back in her own home, but she is also all alone as the man she loves is gone and now she has to raise Kelly and Hayes by herself. Sure, Liam Spencer (Scott Clifton) loves showing up out of nowhere to help out, but Steffy finds herself losing it.

That’s why she has another meltdown with her father. She tells Ridge Forrester (Thorsten Kaye) she can barely believe how Li Finnegan (Naomi Matsuda) has been acting, not even allowing her to have a memorial for her husband’s cremated body. Of course, Steffy is unaware he is alive so she decides it’s time to take advantage of being rich and pack up her kids for Europe so Jacqueline MacInnes Wood can take maternity leave.

Paris Buckingham (Diamond White) can be persuasive but she also can’t be persuaded. She wants Carter Walton (Lawrence Saint-Victor) and that’s that. Even Carter has told her it’s a no-go, but she does not care. She is going to go after what she wants because how dare anyone not think Paris is the greatest thing to ever happen to this fictional version of LA.

As Carter considers the things Paris had to say in her own favor, Quinn Fuller (Rena Sofer) warns Carter to stay away from this woman, who seems crazier than her sister seemed when she first arrived on the scene. Zoe Buckingham (Kiara Barnes) turned out to actually be sane, but Paris? Not so much. She wants what she wants and who she wants and doesn’t care what anyone else says.

Quinn can see right through this young woman, but Carter clearly can’t and that’s why Quinn tries to tell him that if he doesn’t get rid of Paris fast, she is going to cause more trouble than she is worth. It doesn’t look like Carter is going to listen because he figures he has no chance with Quinn, so he needs to be with someone. Stay tuned to The Bold and the Beautiful weekdays to see how these stories play out.