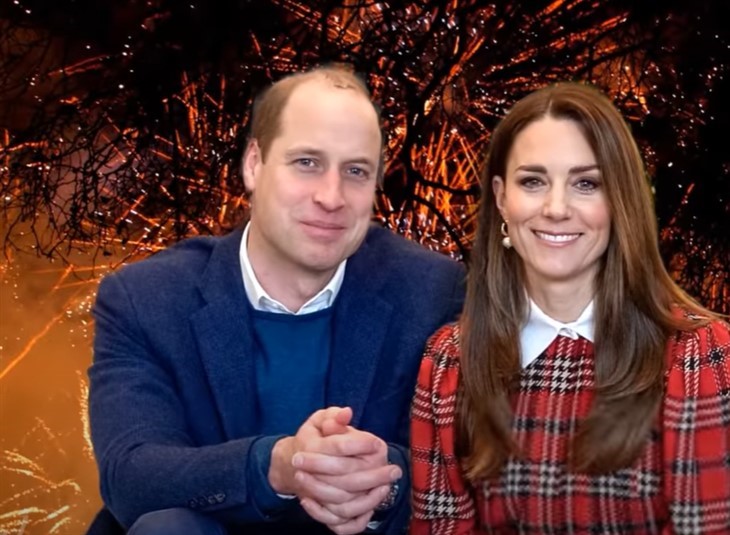 British royal family news reveals that everyone wants to get in a last minute message or last second hug before the ball drops, the fireworks explode, and the clock thrusts us into a brand new year. The Duke and Duchess of Cambridge are no different and released their New Year’s message to the nation today.

The royal couple tweeted a delightful photo of William in a smart tuxedo and Kate in a beautiful sparkling gold-colored dress. They appear to be in the back of a car driven to a royal event, both are smiling broadly with Kate leaning into her husband with her hand on his arm. Her hair is swept up in an elegant updo and it appears to be the elegant dress she wore to the red carpet premier of the latest James Bond movie, No Time to Die. William and Kate wrote on Twitter: ‘Wishing everyone a Happy New Year!’

William’s father Prince Charles and his stepmother Camilla the Duchess of Cornwall also delivered a NYE message with a photo montage on Twitter.

Charles and Camilla posted, “A joy to see so many of you again this year – whether that be with elbow bumps, handshakes or a friendly wave from afar! Wishing you all a very happy and restful New Year.’

The message was immediately talked about for who Charles left out of the picture montage. One guess, c’mon, you know which son didn’t make the cut.

Charles released a series of photos showing royals conducting official duties and attending royal events. The picture showed Charles, his mother Queen Elizabeth, his wife Camilla, his son Prince William and William’s wife Kate Middleton. Within that particular familial constellation, Prince Harry and his wife would normally be included. But Harry and Meghan have not acted normally (far, far from it) for a very long time.

Instead they have made it a life’s mission to disparage his family as well as the monarchy. They have gone so far as to flaunt a series of televised rants against the royals, leaving them very little recorse to defend themselves. However, has Charles finally found the ultimate defense—ostracization? If so, it is a rebuke Harry and Meghan fully earned all by themselves.