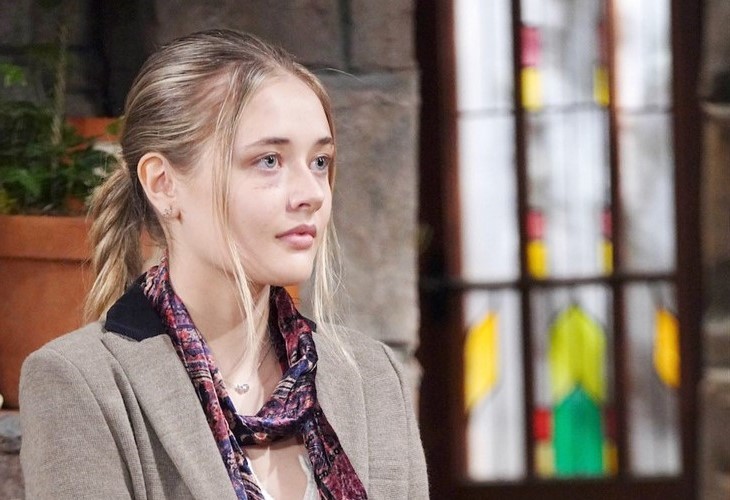 The Young and the Restless (Y&R) spoilers reveal that the question “How Old Is Faith On The Young And The Restless” is a popular one, perhaps owing to the fac that the character was recast in 2021.

Reylynn Caster plays Faith Newman on the Genoa City, Wisconsin based CBS soap. Prior to her arrival last year, the role was played by Alyvia Alyn Lind from 2011-2021 and McKenna Grace from 2013-2014. Caster is 18-years old and her character was born onscreen in 2009 which would make her roughly 13 in technical years, but in soap years she might as well be 31. Soap operas have something called Rapid Aging Syndrome and from one day to the next a character can morph from an infant into someone applying for a driver’s license.

Faith is the daughter of Nick Newman (Joshua Morrow) and Sharon Rosales (Sharon Case). She has an assortment of siblings courtesy of her parents’ other relationships. She has an older sister, Summer Newman (Hunter King), and an older sister named Mariah Copeland (Camryn Grimes). Mariah had a twin named Cassie who is deceased. She also has an older brother named Noah Newman (Rory Gibson) and a younger brother named Christian Newman (Alex Wilson).

Faith has had an eventful life as a member of the Newman family. This includes being kidnapped as an infant by her uncle Adam Newman (Mark Grossman)! Not too long ago this news was blasted again in the headlines and poor Faith was the target of bullies who used this and other info to lead her down a dark path.

Because of her insecurities Faith fell in with the wrong crowd and it turns out the ringleader was behind the online bullying. Before the stunning info came out however, Faith developed a drinking habit and one night stole Grandpa Victor Newman’s (Eric Braeden) truck which ended in a crash.

This coincided with her mom fighting a successful battle against breast cancer and marriage to Rey Rosales (Jordi Vilasuso). There was plenty for Faith to absorb and yet she was using a most negative set of coping skills.

The Young And The Restless Spoilers – Faith Newman’s Health Crisis

Later she had a serious medical issue which was diagnosed as acute interstitial nephritis—she needed a kidney transplant. Her parents were understandably devastated and tried in vain to get a kidney for her—but the Newman name and money couldn’t solve this particular problem. Ultimately it was her uncle Adam who shared her rare blood type, and he donated the kidney that saved her, thus exonerating his past behavior.