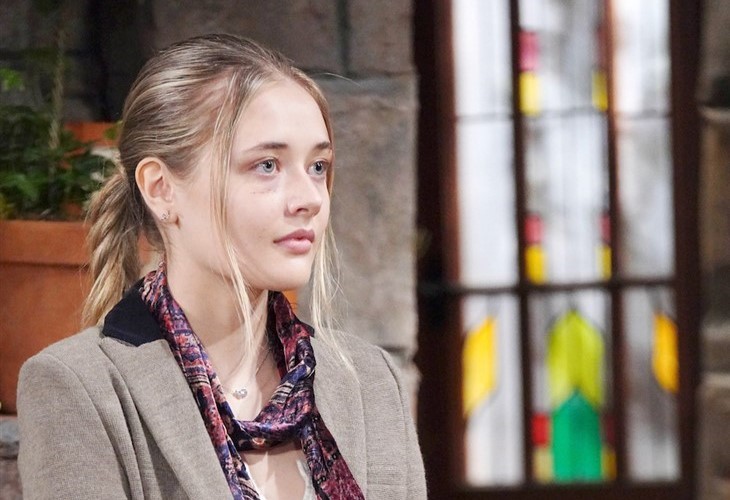 The Young and The Restless spoilers and updates tease the young woman who now has the role of the daughter of Nick Newman (Josh Morrow) and Sharon Newman (Sharon Case) has an interesting background. Here is the chance for fans to learn a little more about her,

From 2011 until 2021 Faith Newman was portrayed Alyvia Lind a fan favorite who left the role to star in the film Chucky. Lind was 14 and her replacement Reylyn Caster is 18. Although the character was not SORAS she is still older but the viewers love her.

Reylnn Caster’s Love Life On And Off Screen

In real-time Reylynn is rumored to be dating 17-year-old actor Armani Jackson (Grey’s Anatomy). On The Young and the Restless her character Faith has been spending time with Moses Winters (Jacob Aaron Gaines). Right now the duo is just getting to know each other as friends but spoilers tease they will at some point become involved romantically.

Reylynn Caster Was A Child Star

Caster was born on March 3 2003 and began acting at age 7 in television commercials. She was in the independent film Wichita in 2014 and in 2015 her family moved from Kansas to California so she could pursue her career. Six months later she appeared in the ABC sitcom Speechless followed by the Amazon Prime series Just Add Magic. In 2016 Castner was in the movies Bender and The Matchbreaker.

Caster’s first role as a series regular was in 2017 on Me Myself and I on CBS. Her first feature film was Adventures of Dally and Spanky in 2019 and she was in the Netflix series The Big Show in 2020. Reylnn Caster plays the guitar and the piano admits she spends too much time on Tic Toc.

Below Deck: Show’s Creator Reveals Problem With The Crew, Calls It A ‘Shame’