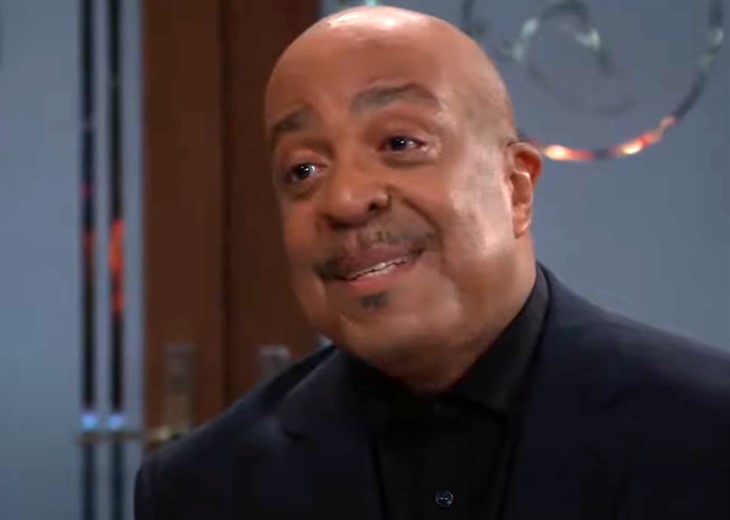 General Hospital spoilers and rumors tease that Marshall Ashford (Robert Gossett) could have been the gunman who killed Epiphany Johnson’s (Sonia Eddy) son, Stan Johnson (Kiko Ellsworth) years ago in past episodes of General Hospital!

General Hospital viewers will recall that Marshall’s cardiac incident, which turned out to be a blood pressure spike, happened immediately after Epiphany talked about her son as the two of them had their first dinner date at the Port Charles Grille.

Epiphany didn’t mention her son by name, only that he was “gone”, but there seems to be a connection – Stan Johnson was Sonny Corinthos’ (Maurice Benard) and Jason Morgan’s (Steve Burton) cyber investigator and was killed down in Florida. He was investigating an operation initiated by Jerry Jacks (Sebastian Roché) under the order of Franco (the first Franco, played by James Franco) and he was obviously lured, so it was a set up. Longtime General Hospital viewers will recall that Stan worked for Sonny and Jason before Damian Spinelli (Bradford Anderson) came along and Jason verified he hadn’t sent Stan to Florida.

General Hospital spoilers show that Marshall was missing for years and living a secret life under a different name – but he’s claiming he got mixed up with some very dangerous people and he was running from them. However, General Hospital viewers will agree that it could be more the case that Marshall joined in with some dangerous people – mobster type people – and his secret life may have been more like a double life!

It’s obvious that Marshall is interested in Epiphany and for more than music and her singing in a band he’s trying to start, so if he remembered that long ago hit and made the connection it could have caused his blood pressure to spike! It would be a very, very awkward situation for Marshall if the truth were to come out that he was the hit man who killed Epiphany’s son all those years ago!

General Hospital spoilers hint even though Marshall has opened up a little bit about his missing years to his son Curtis Ashford, (Donnell Turner) for the most part he is still being very secretive! General Hospital viewers will recall that Curtis has been wanting specific details but Marshall has not been wanting to give him any details, claiming that the danger he had run from still exists.

But the case also could very well be that it’s Marshall who’s the bad guy, and has been the bad guy involved with mobsters for all those years, and he doesn’t want to get caught! It’s a perplexing situation indeed for all those in Marshall’s life when they want to trust him but are unable to because he’s being so evasive! Marshall has told Curtis he doesn’t want to give details because too much talk might bring the trouble he was dealing with to town and it would be Curtis’ trouble, but what if it’s Marshall himself who’s the trouble?