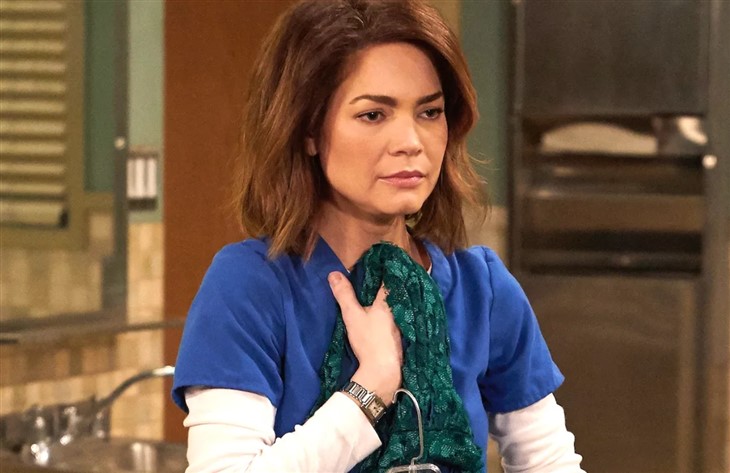 General Hospital (GH) spoilers reveal that troubled Elizabeth Baldwin (Rebecca Herbst) could have been the accomplice that let Peter August (Wes Ramsey) out of the freezer he was left in to die.

Could this outrageous plot twist be the latest turn in Liz’s trauma drama? Let’s unpack what we know about this stunning speculation.

Liz’s boo, Hamilton Finn (Michael Easton) was present when Peter took a seemingly deadly fall in the GH stairwell. Together, they put him in a freezer in the GH sub-basement. Peter was still alive and someone helped him escape. That much was obvious but when Peter was captured, he hinted to lawyer Martin Grey (Michael E. Knight) that he had a mysterious unnamed accomplice.

Peter was holding on to the identity as some sort of last-ditch piece of hope that he could escape his fate, but alas, he escaped before his trial and the plot point was dropped.

GH spoilers – What Happens Next With Liz Webber?

Liz has had issues lately, including missing chunks of time, sleep walking and the like. She is suffering from some sort of mental block but just checked herself out of rehab early, and promptly turned up for work. No one thinks her half-baked plan is a good idea and she will soon prove them right when she has a meltdown.

Liz goes into the stairwell while running an errand and remembers seeing Peter there. It floors her, literally and she must sit down to regain her composure. Does this mean she is about to remember something about this gruesome scenario that she previously blocked out?

Explosive show spoilers tease that Liz has another memory flash. Will it reveal she helped Peter while in a dissociative state? If this is the case Liz could crumple under the knowledge of what she did.

Then again, some fans are positive that her trauma is somehow connected to her father Jeff Webber (last played by Richard Dean Anderson). Will this turn out to be the case, will Liz remember something drastic and awful related to her childhood and her father? If so, Peter could turn out to be the trigger that brings her memories flooding back, so stay tuned GH fans!