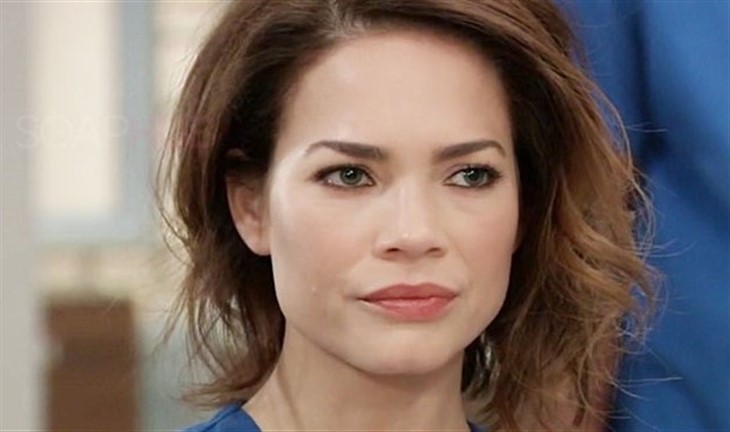 General Hospital spoilers tease that Elizabeth Webber (Rebecca Herbst) is heading back to General Hospital. Elizabeth had spent most of the summer seeking treatment for her sleepwalking issues. While she was in that state, she did some scary things, like ripping up her wedding dress from her marriage to Franco Baldwin (Roger Howarth). Worried that she might be a danger to herself or her family, Elizabeth committed herself. But after several weeks, Elizabeth signed herself out and is now ready to go back to work or so she thinks. Dr. Kevin Collins (Jon Lindstrom) thinks that Elizabeth might have left the institution too early, but Elizabeth was adamant.

General Hospital spoilers reveal that Elizabeth’s first day back on duty at General Hospital will be quite eventful. If Kevin is right and Elizabeth isn’t quite ready yet, then this has the potential to be a complete disaster. While Elizabeth will likely spend the day convincing her friends and family that all is well, there may be trouble just beneath the surface.

Under normal circumstances, Elizabeth is one of the best nurses at General Hospital. But if she is not mentally ready for the stress on her first day back, there could be trouble. Perhaps Elizabeth will become distracted at the wrong moment or even suffer from a hallucination. If she is caring for a patient at the time, she could make a mistake that could end in tragedy. Hopefully, Elizabeth can snap back to reality in time, but there is always the possibility that it won’t happen and a patient could suffer or perhaps even lose their life!

General Hospital Spoilers – Elizabeth Webber Needs To Face Her Past!

Although she probably was quite rested by her recent stay at the institution, she still hasn’t faced whatever the issue was that caused her sleepwalking/stalking in the first place. Only intense therapy will bring that to light and Elizabeth hasn’t been willing up until now to take that step. But perhaps after a near disaster at work, Elizabeth will realize she can only move forward if she confronts her past once and for all.

Is Elizabeth ready to return to General Hospital? Or will she make a deadly mistake because she hasn’t fully recovered? What does Elizabeth’s past have to do with her present? Anything can happen in Port Charles so stay tuned to General Hospital airing weekdays on ABC. And don’t forget to check back right here regularly for all your General Hospital news, information, and spoilers!

B&B Spoilers: What’s Next For Finn And Steffy