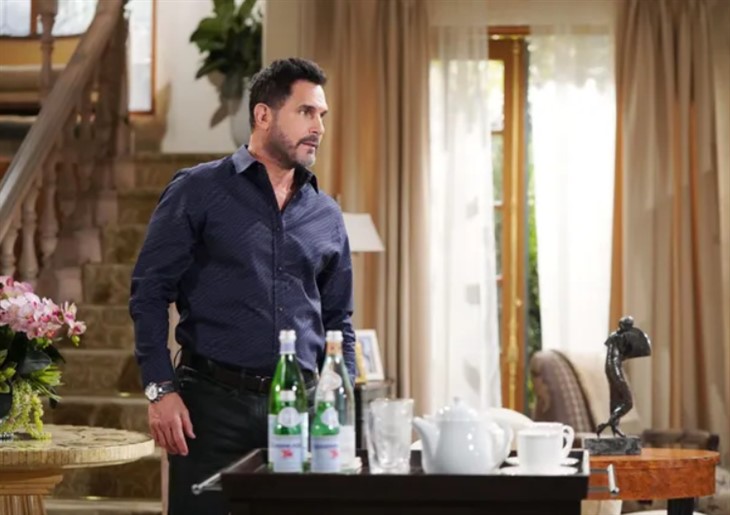 The Bold And The Beautiful (B&B) spoilers suggest that Deacon Sharpe’s (Sean Kanan) dirty little Sheila Carter (Kimberlin Brown) secret is about to be exposed. Will Bill Spencer (Don Diamont) use this to keep Deacon and Brooke Logan (Katherine Kelly Lang) apart?

The Bold and The Beautiful spoilers reveal that Brooke Logan (Katherine Kelly Lang) has shot down Bill’s plea to get back together. Brooke has made it plain to Bill that she wants Ridge Forrester (Thorsten Kaye) and no one else. However, Bill has already paid Deacon one visit and ordered him to stay away from Brooke. Will Bill stop by again and find Sheila?

Sheila is terribly jealous of Brooke and could even speak to Bill while in her disguise. Will Bill see through Sheila’s mask and realize that Deacon has been harboring her all this time? Could Bill even turn Deacon in so that he has a parole violation and send him back to prison to keep him away from Brooke? Will Deacon go to prison because Sheila wouldn’t stay away?

B&B Spoilers – What Happened To The Hero Bill Spencer?

At one point Bill seemed to be turning his life around and becoming that man that he always claimed to want to be. Bill did save Li Finnegan (Naomi Matsuda) before turning back in to the waffle king. Now all of the sudden, Bill wants Brooke but if he can’t have her he’s waffling back to Katie Logan (Heather Tom) once again.

Carter Walton (Lawrence Saint-Victor) witnessed Bill’s latest plea with both Brooke and Katie. Carter also called Bill out on his actions as well. After all, Katie deserves much better than a man who has always made her his second choice. However, that may not stop Bill from turning Deacon in for safe measure.

The Bold And The Beautiful Spoilers – Deacon Sharpe Is Hopeful

During the week of November 28 – December 2, Deacon will learn that Brooke shot down Bill’s reunion attempt. Could Deacon take this as a sign that Brooke wants to be with him? Will Deacon realize that Thomas Forrester (Matthew Atkinson) is behind Brooke and Ridge’s marriage blowing up? What will Bill gain from getting rid of Deacon?

Bill may believe that getting rid of Deacon improves his chances to be with Brooke. However, Brooke could not make her position more clear. What will it take for Bill to see the light? Will Deacon go back to prison and Bill still not get the girl?