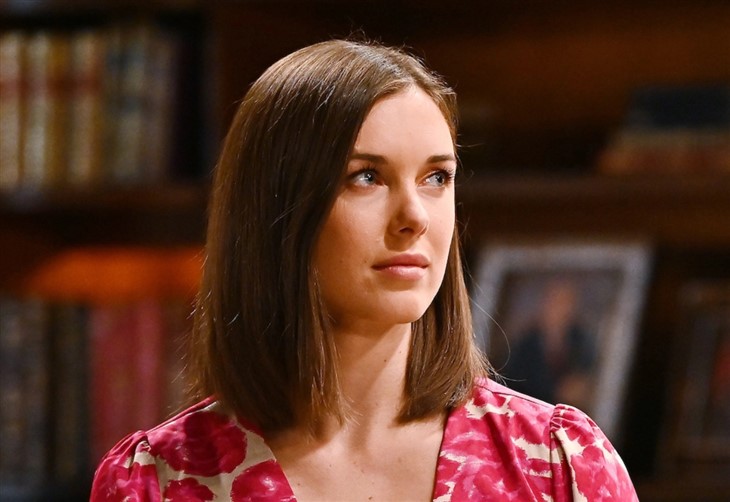 Still in Jacksonville, Florida, Carly Corinthos (Laura Wright) smiles after getting it all out to Drew Cain (Cameron Mathison) about her past in high school. Drew had convinced her to quit blaming herself for what happened back then with the Roberts family and her high school friend. Carly knew better, mentally, but still held guilt and self-loathing inside for the high school seduction by her best friend’s father which Drew convinced her was rape.

Carly smiles as she tells Drew maybe it’s time she stopped being Carly Corinthos. She’s ready to reemerge as a whole new her, after all that catharsis.

At General Hospital, Curtis Ashford (Donnell Turner) and Nina Reeves (Cynthia Watros) catch up, and Curtis asks Nina what it was she wasn’t ready for. She certainly wasn’t ready for having to return to her mothering role with Sasha Gilmore (Sofia Mattsson) at least not so suddenly. She also wasn’t ready to realize there is a possible serial killer loose once again in Port Charles. She certainly wouldn’t be ready to find out that Amnesiac Mike from Nixon Falls has completely “died” and Mobster Sonny has returned full force. There is a lot that Nina hasn’t been ready for lately, and she certainly needs a talk with her old friend Curtis.

Also at the hospital, Willow talks to TJ Ashford (Tajh Bellow) and it sounds like she’s having to make some desperate decisions.  She tells TJ that there is just no other choice she can make, and she must be talking about her pregnancy. She had wanted to wait until her second trimester before she went on chemotherapy for her leukemia, not wanting to harm the baby.

It sounds like she may either have to start chemo before she’s ready, or she may have to do something more drastic. However, it’s not likely she has to terminate the pregnancy as she’d be much more upset.

At Spring Ridge, Ava points her finger and hisses she knew it was too good to be true, directing her finger and her comments at Ryan Chamberlain (Jon Lindstrom). Ava had taunted Ryan and gave him a status report on the sudden “disappearance” of Esmé Prince (Avery Kristen Pohl) and he became angry and clenched his fist. Ava obviously suspected not only that Ryan was faking his locked-in syndrome, but also that he and Esmé were much more closely connected than Esmé had ever revealed. She exposes the faker to his face and no doubt Kevin Collins (Jon Lindstrom) will be getting a report as well. Ava may have already suspected that Ryan is Esmé’s father or she wouldn’t use her to taunt him with; perhaps she found the letter they were struggling over and read it.

Dex Heller (Evan Hofer) still looks in pretty rough shape after “hanging around” in the freezer in the back of Pozzulo’s. But he’s not too frozen to bargain with his real boss, Michael Corinthos (Chad Duell). Michael and Josslyn Jacks (Eden McCoy) were in Pozzulo’s where Josslyn had cut Dex loose, with Sonny coming in shortly afterwards.

Dex is bargaining with Michael, telling him that is how he can give him what he needs. What Michael needs is Sonny behind bars, so perhaps Dex is reconsidering the need to tell the police he was kidnapped.

At Kelly’s, Josslyn updates Trina Robinson (Tabyana Ali) on what happened with Dex at Pozzulo’s. She tells her Sonny is even worse than she thought, knowing for sure now he had Dex in the freezer and had a goon threatening him with knives. She should know, since she used one of the knives to cut Dex loose from the meat hook in the freezer. It looks like soon Josslyn will have to admit her feelings for Dex are even “worse” than she thought as well, at least it’ll be worse for Cameron Webber (William Lipton).

Alone in his office at Pozzulo’s, Sonny pounds his fist on his desk as he has an angry outburst. He shouts he has a problem with that, “that” likely being something to do with Michael and Josslyn’s interest in Dex. Either that, or Michael’s interest in Dex has finally made Sonny realize that Dex must be Michael’s plant in his organization.

Sonny may have a worse problem now with Michael than anyone would ever realize, and he’ll have to make a choice. Either find some way to make peace with Michael or be forced to take out his adoptive son!