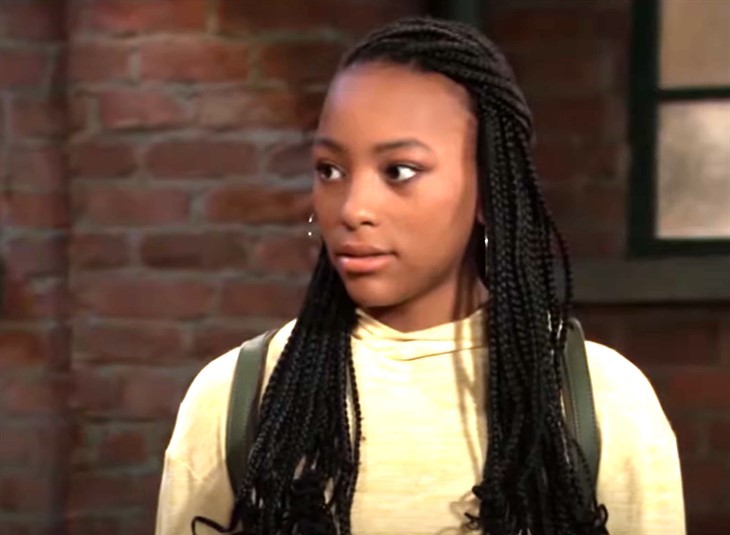 General Hospital Spoilers tease that Trina Robinson (Sydney Mikayla) may be too smart for her own good. After a very heated conversation between Josslyn Jacks (Eden McCoy) and Esme Price (Kristen Avery Pohl), somehow Esme and Trina ended up alone together. It was during that conversation that Trina realized that Esme and Spencer Cassadine (Nicholas Chavez) were working together as Ava Jerome’s (Maura West) stalker. But instead of going to the police or even Ava with her suspicions, Trina instead confided in Cameron Webber (William Lipton). That may be a very big mistake on Trina’s part!

Cameron is a great guy, but he is still just a teenager barely out of high school. He won’t likely be a great asset in Trina’s quest to get to the truth. In fact, he will likely slip up and Esme will figure out that he and Trina are on to her and Spencer. And Esme isn’t just a spoiled teenager, she’s quite dangerous in her own right. Even Ryan Chamberlain (Jon Lindstrom) is uneasy around Esme. And it’s not easy to unnerve the serial killer.

GH Spoilers – Esme Prince Has A Violent And Sadistic Streak!

When Spencer needed an alibi to prove he wasn’t Ava’s stalker, Esme was more than happy to provide one. She staged another attack on Ava, this time setting her car on fire and leaving Kiki Jerome’s (Hayley Erin) hospital badge at the scene. What’s even more creepy is that Ava said that the badge was buried along with Kiki after her murder at Ryan’s hands. So if Cameron does tip Esme off, he and Trina may be in great danger!

While she may get annoyed with Cameron, Esme will realize that her true enemy is Trina. And if Esme is as much like Ryan as it seems, Trina might find herself in quite a bit of danger. Esme isn’t a serial killer, at least not yet, but she will certainly need a first victim. And her rival for Spencer’s affections is just the person that Esme will decide to eliminate!

Will Cameron and Trina get the goods on Esme? Or will Esme realize they are close to the truth? Is Esme a serial killer in the making? Anything can happen in Port Charles so stay tuned to General Hospital airing weekdays on ABC. And don’t forget to check back right here regularly for all your General Hospital news, information and spoilers!