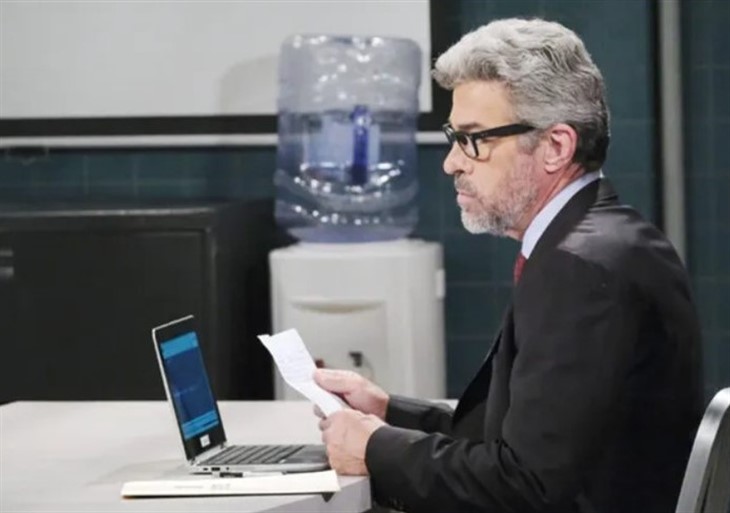 General Hospital (GH) spoilers and updates for Wednesday, May 4, 2022 tease there will be surprises, shocks and promises on the next episode of GH!

First up, a blindsided Mac Scorpio (John J. York) has surprising news for his shocked older brother Robert Scorpio (Tristan Rogers) – he talks about doing the parenthood thing all over again! Previous GH episodes revealed Felicia Scorpio (Kristina Wagner) was very sentimental about when her daughters with Frisco Jones (Jack Wagner) were little. She and Mac were in Maxie Jones’ (Kirsten Storms) apartment babysitting as Felicia was cuddling Bailey Louise Jones (London and Jett Prinzo-Berendt) and asked Mac an odd question!

Felicia had asked Mac if he had ever wanted children of his own, as he seemed puzzled. He verified that raising Maxie, Georgie Jones (Lindze Letherman) and Robin Scorpio-Drake (Kimberly McCullough) had been like raising his own, and verified he loved them as his own.

Meanwhile, while Mac is telling Robert, Felicia is talking to Anna Devane (Finola Hughes) who is even more shocked than Robert! Anna is agape as she says to Felicia “You’re not – “ pregnant?! Felicia’s face says it all – she’s deadly serious; will Mac and Felicia be tempted to name the new baby “Menopause”?! Felicia indeed likely confirms to Anna that she and Mac are experiencing a midlife pregnancy, and Felicia’s little caboose will be younger than Bailey, her youngest grandchild! For Mac, the baby will be his firstborn child and both will be navigating the thought of putting a child through college in their senior years! That kind of surprise is nothing that people their age expect to happen, but apparently Felicia’s taken the test and it’s positive!

Valentin Cassadine (James Patrick Stuart) enters Charlie’s Pub to see familiar faces; he smiles and says “We meet again”! He spots his ex-wife Nina Reeves (Cynthia Watros) and Phyllis Caulfield (Joyce Guy) in the middle of a conversation. Valentin and Nina are still on friendly terms for the most part, and they enjoy the occasional conversation. Valentin stood right by Nina’s side in support when her heart was broken and she was betrayed which resulted in her months-long trip to Nixon Falls.

Nina and Phyllis continue their conversation after Valentin leaves, and they talk about Nina’s relationship with Sonny Corinthos (Maurice Benard). Nina says she thinks there is a way forward for her and Sonny, after that romantic dance the night before at The Savoy! They are both free agents with the divorce between Sonny and Carly Corinthos (Laura Wright) being final. However, moving forward could cause some complications in Nina’s court case that is pending to be able to visit their mutual grandson Wiley Corinthos (Viron Weaver)!

Meanwhile, Sonny answers a phone call from an old friend who is coming to Port Charles. He tells the person on the other end that he can’t wait to see him or her, and right now Sonny can use all the friends he can get! Previous GH episodes revealed that Michael Corinthos (Chad Duell) has completely cut him off again, as he’d mentioned to Nina the previous night when they were dancing at The Savoy. Viewers will be interested to see who this old friend of Sonny’s will turn out to be in Wednesday’s episode.

Back at General Hospital, Michael, Brando Corbin (Johnny Wactor) and Sasha try to cheer Willow Tait (Katelyn MacMullen) up and distract her from Harmony Miller’s (Inga Cadranel) serious condition. Sasha smiles as she says that means that there’s hope, likely referring to Harmony’s having regained consciousness. Harmony’s life hangs in the balance as long as she remains hypotensive, and further surgery cannot be done to repair her internal organs. Willow was very scared when she was in talking to her and her monitors showed she was in distress!

General Hospital Spoilers – Please Get Back To The ICU

Carly had just gone into Harmony’s ICU room where she had motioned her to come in so she could talk to her. Carly had verified she had not told Willow what she knew, namely that Willow is not Harmony’s daughter, and she had called for Nina. Now Carly is back out of Harmony’s room and calling for someone to please get back to the ICU after telling Harmony Willow had a right to know! Perhaps Harmony’s vitals are going crazy again with Carly pressuring her to tell Willow the truth about Harmony not being her birth mother!

In her ICU room, Harmony is angry and it’s probably at Carly, as she growls that Willow can never know! It’s obvious what Harmony wants Carly to promise her and it’s something Carly will likely not keep a secret very long, although she continues to pressure Harmony to tell! Harmony seemed ready to tell Willow the truth on her own but so far hasn’t, and if she dies, the truth will never be told! Does she just want it to stay between herself and Nina, who hasn’t been brought in the loop?

Days Of Our Lives Spoilers: The Moment Of Truth For Gwen