Days Of Our Lives Spoilers: The Moment Of Truth For Gwen 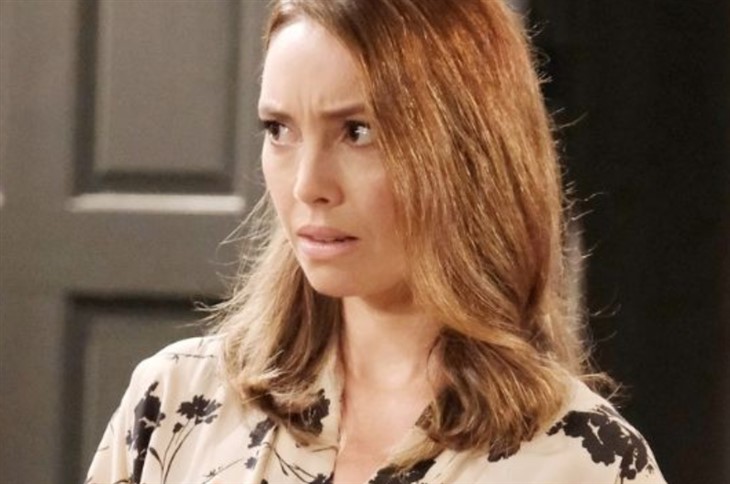 Days of Our Lives (DOOL) spoilers for Wednesday, May 4, 2022, reveal things going from bad to worse for Gwen Rizczech. And she didn’t think it could get much worse.

Perhaps if you don’t want your life to get even worse, you shouldn’t whisper in your vengeful half-sister’s ear after she ruined your wedding that you killed her beloved grandmother. What did Gwen (Emily O’Brien) even think would be accomplished by telling Abigail DiMera (Marci Miller) what she did to Laura Horton (Jaime Lyn Bauer).

Now, it’s confrontation time for Jack Deveraux (Matthew Ashford), Jennifer Deveraux (Melissa Reeves), Abigail, and Gwen. The Deveraux women are not going to let this one go. They just spent the last year mourning Laura and now thet know that Gwen was responsible for her sudden and unexpected death.

They demand to know how she did it and why. It really actually was an accident as Gwen never meant to kill the woman, but she did give her a head injury on purpose and then she died. How will Gwen explain this one away?

Leo Stark (Greg Rikaart) is still nursing a broken and wounded heart after his wedding to Craig Wesley (Kevin Spirtas) was ruined and now Craig wants nothing to do with him. But Leo wasn’t lying when he said he really developed feelings for Craig, so he makes one last plea for Craig to forgive him.

But Craig isn’t having it. It’s over and that’s that. There is no going back, except for Craig. He is going back to New York and leaving Leo and Salem behind.

Chloe Lane (Nadia Bjorlin) now knows that her mother is dating Clyde Weston (James Reade) of all people and is horrified. What is happening to her parents and their senses? First, her father falls for Leo and now Nancy thinks that Clyde Weston, an abusive ex-con and murderer, is the best choice as a man to help her get over Craig. What a mess the Wesleys are in. How will Chloe save them both? Stay tuned to Days of Our Lives weekdays to see how these stories play out.