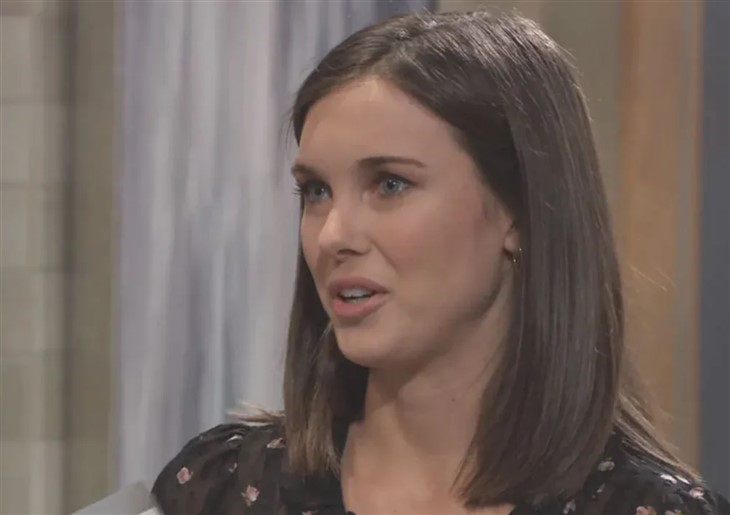 Previous GH episodes revealed that Carly had found some of Neil Byrne’s (Joe Flanigan) papers from his file on Harmony Miller (Inga Cadranel) in Alexis Davis’ (temporarily Stephanie Erb) fireplace. Carly had walked in on Harmony as she was trying to light them on fire, claiming they were old personal papers. Carly’s nosiness got the best of her when Harmony left the room and she pulled out an unburned piece.

Carly could see they were therapy notes on Harmony from Neil, and that it was about Harmony’s guilt over keeping a baby that wasn’t hers. Carly knew that had to be Willow and she confronted her, and Harmony stabbed her with a syringe.

Alexis arrived home and remembered Harmony talking about it being peaceful on Rana Point, and went to look for her, seeing the living room torn apart! She found another piece of Neil’s notes and read it, and she knew Harmony had killed Neil and likely his brother Brendon Byrne (Josh Coxx) as well! She had rushed to Rana Point where she found an off the rails Harmony getting ready to send an unconscious Carly off the cliff in her SUV. As Alexis and she struggled, Carly came to and got Harmony away from Alexis, and as Alexis called 911, Harmony ran! She was trying to get to the road but the unthinkable happened!

Harmony ran out in the road just as Sasha Gilmore Corbin (Sofia Mattsson) and Gladys Corbin (Bonnie Burroughs) were speeding away from a persistent paparazzi!  Harmony had ran right out in front of Sasha’s car and she was unable to avoid her; however, she did give her CPR and got her heartbeat back. Sasha had gone to the chapel at GH to tell Willow that part of it and ask her forgiveness, which she was given.

Then Carly came to the chapel and asked time alone with Willow, and a devastated Sasha left; Willow had questions as to why her mother was there to begin with. Carly tells her that she has the answers to her questions and they begin to talk.

Willow tells Carly that her mother’s accident makes no sense – and she asks her if she knows what happened. Carly starts with telling Willow something she already knows, that Gladys had told her Sasha was driving and was the one who hit Harmony. Willow tells Carly that Sasha told her Harmony came out of nowhere and ran in front of her car. But she doesn’t understand why, or why she was there in the first place; saying that area is so remote! Willow still needs answers as to why Harmony was at Rana Point, and mentions Carly telling her she and Alexis had been there.

Carly takes Willow’s hands and they sit down on one of the chapel pews. She acknowledges that she and Alexis had been at Rana Point with Harmony. Carly tells a worried Willow she needs to prepare herself, because it will be hard to hear and even harder to understand. Willow asks what happened, and why was her mother even there? Carly will tell her what happened up at Rana Point and what led up to it, although she likely won’t reveal that Harmony isn’t her mother.