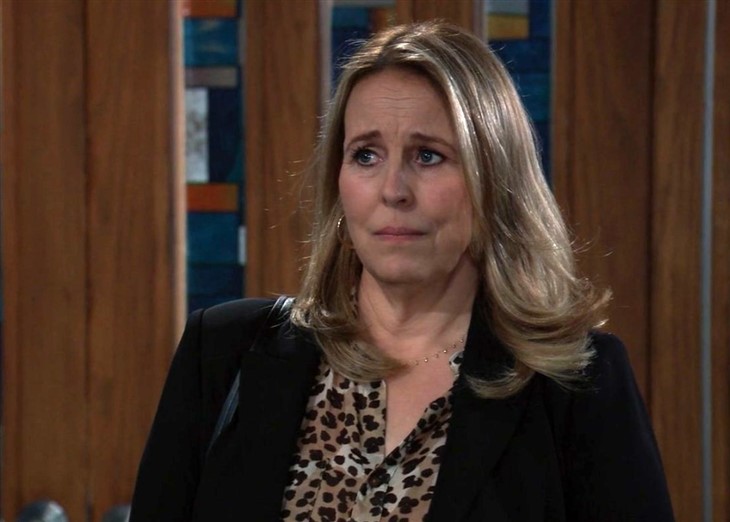 General Hospital spoilers for Wednesday, May 11 tease surprises, plots, and confrontations are in store for the Port Charles power players on GH!

General Hospital Spoilers – I’d Say That You Were Defending Her

At Kelly’s, Laura Collins (Genie Francis) confronts her son Nikolas Cassadine (Marcus Coloma) over his defense of the conniving Esme Prince (Avery Kristen Pohl)! It looks like Nikolas has denied Ava Cassadine’s (Maura West) main complaint that has put the Cassadines in separate bedrooms and cancelled their vow renewal. Laura had talked to Ava about the couple’s troubles in previous episodes and she had told Laura that Nikolas allowing Esme to stay in Wyndemere Castle was the main problem.

Esme tends to have a bad effect on people who believe her manipulations and lies and Nikolas has been a sucker! It looks like he’s lying to his own mother or else he’s in a strange form of denial as Laura says she’d say he’s defending her!

GH Spoilers – I Have Something Very Special

Meanwhile, at Wyndemere Castle, Spencer Cassadine’s (Nicholas Chavez) playing a little con game of his own after Esme caught him snooping in her room. He confronted her with a large stash of letters he found in her private stash shoebox from Maggie Fitzgerald (uncast character) the nanny she claimed she’d lost track of!  It looks like Spencer has finally gotten in touch with his inner Cassadine as he tells Esme he has something very special in store for her! She looks dotingly up into his face and laps it up like a kitten with a bowl of cream, having no clue he’s playing her! Or does she – perhaps they are playing each other!

Martin Grey (Michael E. Knight) is telling someone, possibly Lucy Coe (Lynn Herring) that Elizabeth Baldwin (Rebecca Herbst) believes she’s being haunted! It’s also possible he may be talking to his sister Laura, since the other person isn’t shown in the scene. However, Elizabeth is bringing in a medium, a referral from Lucy, to see if the medium can figure out what has been happening.

Elizabeth got the idea that her stalker may be a ghost, possibly of Franco Baldwin (Roger Howarth) from her youngest son, Aiden Spencer (Enzo DeAngelis). It’s a good as theory as any, since the person – or, former person as the case may be, seemingly can walk through walls!

GH Spoilers – What If It’s Not Him?

Meanwhile, Elizabeth is elsewhere talking to someone who could be the medium, although the hair looks like Portia Robinson’s (Brook Kerr). However, Elizabeth is not dressed for work at General Hospital so it may be the medium. Elizabeth starts to think about who or what might be causing the strange, seemingly Franco-related occurrences. Then she has a frightening thought – what if it’s not him, what if the ghost is of someone else? This has been happening since before Peter August (Wes Ramsey) died, so at least they can rule his ghost out!

Willow Tait (Katelyn MacMullen) has reached a decision about something and tells Michael Corinthos (Chad Duell) she needs to go somewhere! Chances are, she is planning a wild goose chase to Oklahoma where the commune was that Alexis Davis (temporarily Stephanie Erb) told her about in yesterday’s GH episode. She would need to hunt down a prophet Josiah (uncast character) and ask about a woman who gave birth on the commune to supposedly, her. Alexis had told Willow the story that Harmony Miller (Inga Cadranel) had told her as an excuse for not having a birth certificate for Willow!

GH Spoilers – Nina Reeves Is Prepared To Go All The Way

Nina Reeves (Cynthia Watros) is talking to someone about her impending court case to get visitation rights with her grandson Wiley Corinthos (Viron Weaver).  She says she is prepared to go all the way when fighting dirty in court, which is what Scott Baldwin (Kin Shriner) said they would have to do. There has already been an ugly story about Nina in The Invader, given to Grant Smoltz (David Lautman) by Michael! There’s plenty of dirt on Michael, and they are trying to find dirt on Willow – let’s see, just with Michael, how about he killed his own stepmother? It’s a matter of public record, and it’s fair game, and then there’s Willow cheating on Harrison Chase (Josh Swickard) when he was expected to die!

General Hospital Spoilers – I Can’t Be That Guy For You

At Charlie’s Pub, Drew Cain (Cameron Mathison) caught Carly Corinthos (Laura Wright) stealing a wine glass Nina had just drunk out of!  She must think Drew will be on her side fighting ugly against Nina in court but he tells her he can’t be that guy for her! Drew most certainly makes Carly put that wine glass back right where she found it!

This isn’t a television show where cops can obtain DNA by illegal means, and he’ll tell Carly that. She can’t just go getting Nina’s DNA for her own purposes without a proper warrant and a reason for doing so!

GH Spoilers – Take Your Chance To Say That She Was Wrong

Meanwhile, Michael is working on Sonny Corinthos (Maurice Benard) trying to get him on his side against Nina! He tells Sonny to take his chance to say that Nina was wrong, probably in court. Scotty had wanted Nina to allow him to call Sonny as a witness in the family court case, and now Michael is trying to draft him so Scotty can’t! That’s a tough ask, considering Michael just hurt Sonny badly by cutting him off again!