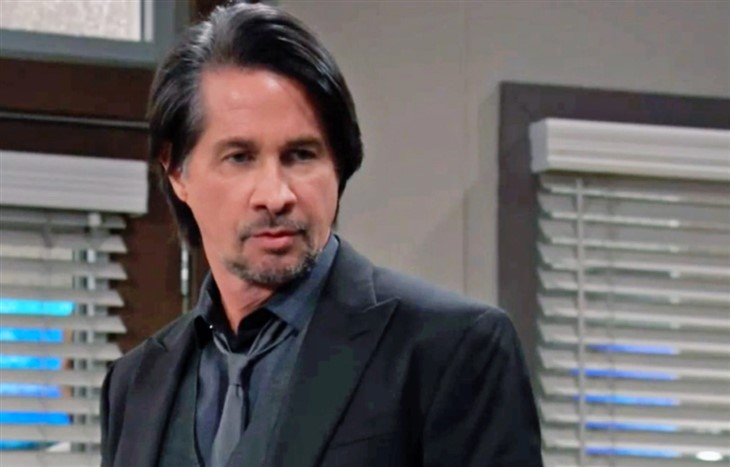 One thing that Finn is worried about is Elizabeth’s consulting a medium to find out if it was Franco Baldwin’s (Roger Howarth) ghost causing the strange occurrences she’s dealt with! Finn tells Laura it shows the desperation that Elizabeth is feeling and the fear that she is trying so valiantly to hide. This stalker knows Elizabeth’s every move, her schedules, every nook and cranny of her home, knocked Harrison Chase (Josh Swickard) out and jammed the security cameras!

Then the stalker apparently followed Elizabeth and Finn to the Metro Court and got into her room while she was in the shower and broke the vase full of flowers Finn had given her! Laura obviously knows about the stalking incidents because Jake and Aiden Spencer (Hudson West, Enzo DeAngelis) have been staying with her and Kevin Collins (Jon Lindstrom).

Elizabeth has been working as many hours as she can get at GH ever since Franco died, and no doubt she is overworked and exhausted. She says she cannot take time off, and has also been having trouble sleeping and taking sleeping pills, not wanting any help and turning down Finn’s offers of getaways.

Finn has already ruled out hallucinogenic side effects from her sleeping pills, which are prescription, although drinking lots of caffeinated coffee could obviously cause the sleeplessness. It was only after Chase was knocked out in her home that she agreed to let Laura and Kevin take care of the boys, and she moved into the Metro Court. Laura becomes even more concerned and worried hearing what Finn is telling her.

Laura wonders to Finn if Elizabeth has not fully processed through her grief for Franco – after all, even though he was dying of a brain tumor, there was still time left. Peter August (Wes Ramsey) had taken that time away, and even though Peter is now dead he never paid for his crimes. Finn knows that anger – but there more than one way of capital punishment and he’s sure he’s paying in the afterlife if there is one!

When Finn and Elizabeth thought he’d killed Peter by throwing him down the stairs, Elizabeth still came to Peter’s aid in spite of his murdering her husband! Elizabeth put the preservation of life if possible ahead of her grief in spite of everything.

Laura suggests that Elizabeth talk to Kevin professionally, but off the record. Kevin and Laura consider Elizabeth and her boys family, after all and Kevin is also concerned by what he’s been hearing from the boys about what has been going on. Kevin very definitely has some ideas what might be going on and it could be triggered by unresolved issues or unprocessed grief. Finn, Laura and Kevin talk about how to get Elizabeth to be open to talking to Kevin – they know she wouldn’t take an intervention type approach well! Perhaps a family dinner might be a little easier to get her to agree to and Kevin could delicately bring up the subject!

Doubling Down With The Derricos: Deon Featured On First Class Fatherhood