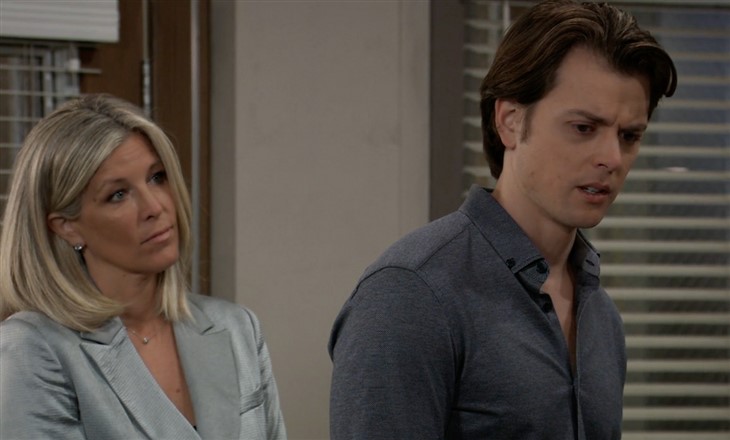 General Hospital (GH) spoilers tease that until now Carly Corinthos (Laura Wright) has supported Michael Corinthos’ (Chad Duell) relationship with Willow Tait (Katelyn MacMullen). But that was before Willow chose to keep Nina Reeves’ (Cynthia Watros) secret that Willow inadvertently overheard. When Willow discovered that Nina and Sonny Corinthos (Maurice Bernard), she didn’t tell Michael or anyone else, because Nina told Willow that the relationship was over. Not wanting to hurt Michael or Carly, Willow kept the information quiet. But during Nina’s hearing, Willow was called to the stand and was forced to reveal everything. Needless to say, Carly was quite unhappy that Willow didn’t say anything until then.

Willow truly believed that she was doing the right thing, but Carly sees things much differently. Carly believes that Willow purposefully chose Nina over the Corinthos family. So look for Carly to once again get involved with Michael’s relationship. She may even try to nudge Michael in Sasha Gilmore’s (Sofia Mattsson) direction. As viewers know, Sasha just lost the baby she conceived with Brando Corbin (Johnny Wactor). Sasha and Brando haven’t figured out what the future will bring for them as a couple. But Carly knows that Michael and Sasha were once in love. And Sasha and Brando may not be able to find their way back to each other, especially if Carly pushes Sasha to pursue Michael once again.

Angry with Willow, Carly will want her to suffer like she is now. And without Jason Morgan (Steve Burton) to talk her down, look for Carly to do what Carly always does when angry. She’s going to find a way to make Willow suffer, and that means breaking up Willow and Michael. Carly may see this as an opportunity to push Michael back in Sasha’s direction. Sasha is very vulnerable right now and if she has Carly in one ear telling her to pursue Michael once again, Sasha may very well move in Michael’s direction, especially if it’s too painful for her to be around Brando.

Will Carly make it her mission to break up Willow and Michael? Will she use a grieving Sasha to make that happen? Who should Michael end up with – Willow or Sasha? Anything can happen in Port Charles so stay tuned to General Hospital airing weekdays on ABC. And don’t forget to check back right here regularly for all your General Hospital news, information and spoilers!

Days Of Our Lives Spoilers: Sami Shocks Lucas With A WILD Plan