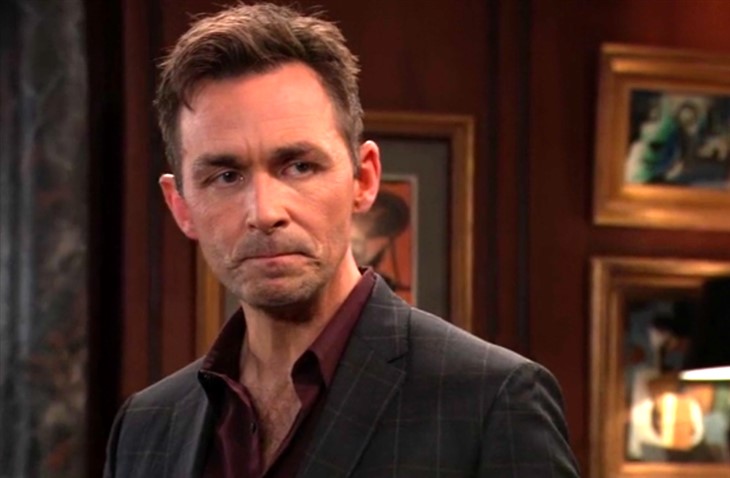 General Hospital spoilers and updates tease there will be catastrophic fallout for some on the next GH!

Valentin Cassadine (James Patrick Stuart) has a mysterious meet-up with someone in a Metro Court suite shortly after the close of the ELQ shareholders’ meeting. More than likely it’s his father, Victor Cassadine (Charles Shaughnessy) who he’s been trying to dodge for a while! He tells him “long time no see” as he dreads what the Cassadine patriarch might want him to do this time!

Victor has an uncanny ability to interrupt Valentin’s love life, as he’s called him several times when Valentin’s been trying to set up something with Anna Devane (Finola Hughes). Maybe he’ll get rid of him quickly this time if he tells him to hurry up and spit out what he wants!

Meanwhile, it’s clear that Anna is suspicious that Valentin has made a poor excuse to reschedule a date again, unless he’s supposed to meet her there at Kelly’s. In that case maybe he’s stood her up and she is not happy about it as she talks to Felicia Scorpio, (Kristina Wagner.) Anna tells Felicia that there is more to Valentin’s absence than ELQ, because the outcome of the failed merger has gone viral and she knows the ELQ shareholder’s meeting is over! She also likely notes that he’s been dodging her questions about the Jennifer Smith (Holly Gagnier) case, always changing the subject when she wants to talk about it! Valentin barely escaped detection by Anna when she and the other WSB agents assigned to the case burst into Jennifer’s hotel room and found the Ice Princess in her hotel safe!

General Hospital Spoilers – Thank You, Your Approval Is Not Needed

Nina Reeves (Cynthia Watros) finally has some woman to woman time with her aunt, Liesl Obrecht (Kathleen Gati) at the Metro Court pool as they talk about their love lives. Liesl recently turned down a marriage proposal by Scott Baldwin (Kin Shriner) but it might be because of the place and the way he did it. A pedicure party with all of his ex-wives and ex-girlfriends was not the place to get down on one knee and ask Liesl to marry him!

The topic turns to Nina’s love life and her relationship with Sonny Corinthos (Maurice Benard). Nina is happy when she says to Liesl that it almost sounds like she approves of her and Sonny!

GH Spoilers – Do You Even Realize?

More fallout from the catastrophic ELQ shareholders meeting takes place at the Quartermaine mansion, where Olivia Quartermaine (Lisa LoCicero) chastises Ned Quartermaine (Wally Kurth)! The whole family is upset with Ned for practically signing ELQ, their family legacy, over to Valentin Cassadine, and Olivia could even lose her half of The Metro Court! Carly Corinthos (Laura Wright) had put her half up and expected to be rolling in the dough! Ned has basically alienated his family already with Brook Lynn Quartermaine (Amanda Setton) stomping out and Drew Cain (Cameron Mathison) and Michael Corinthos (Chad Duell) upset! Olivia asks Ned if he even realizes how bad this is going to get?

A shaken Drew arrives at The Metro Court to tell Carly what happened and she’ll be even more shaken. She hasn’t answered calls from her broker and Drew already knows what the broker was calling about. He explains that the merger didn’t go through and that Michael has taken a big financial hit as well.

Carly can’t believe her ears when she finds out not only didn’t the merger go through but everyone has lost millions! Will she even have enough money to buy her half of The Metro Court back during the thirty day redemption clause?!

Michael is still back at the Quartermaine grounds and it looks like he may be at the gatehouse where he and Willow Tait (Katelyn MacMullen) live with Wiley Corinthos (Viron Weaver). He is talking to someone on the phone, likely his Corinthos plant Dex (Evan Hofer) telling him they’ll have to get creative! He had previously made a call to Dex after the conclusion of the shareholders’ meeting telling him there was a setback. However, Sonny might find out about Michael’s spy because there is a spy listening to him – Leo Quartermaine (Easton Rocket Sweda)! Leo likes Sonny and he’ll certainly tell someone, either his mom or Sonny himself what he overheard!

Back at the Metro Court pool, Nina and Sasha Gilmore Corbin (Sofia Mattsson) scream as someone takes Sonny down, but not the way you think! Willow has collapsed near the edge of the pool with her eyes rolling back in her head, and Sonny just happened to be there to catch her! But it looks like she might be having a seizure and falling sideways into the pool taking Sonny with her!

Perhaps Liesl hasn’t left yet and can render medical aid until the paramedics arrive and Willow’s taken to GH! Otherwise, they’re on their own trying to save Willow’s life!