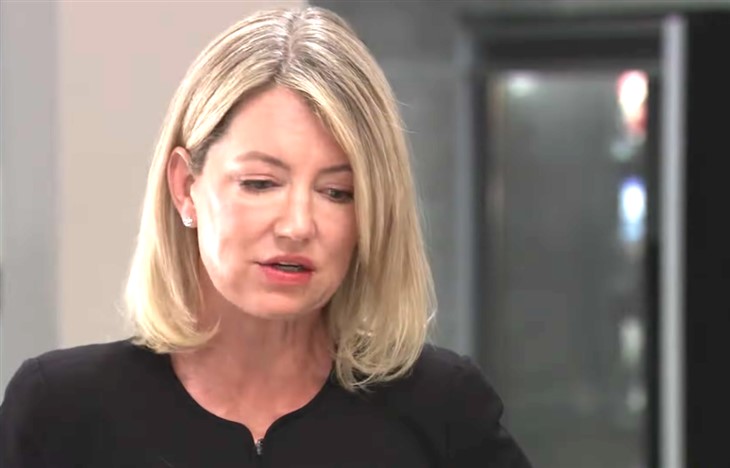 General Hospital (GH) spoilers tease that the war between Nina Reeves (Cynthia Watros) and Carly Corinthos (Laura Wright) is anything but over. Carly’s next move is likely to deny an extension of Crimson Magazine’s lease at the Metro Court. If she can force Nina out of her building, it will be one less reminder of Nina and Sonny Corinthos’ affair! But Carly has made some questionable financial choices recently, and Nina may turn things right back around on Carly.

Michael Corinthos (Chad Duell) and Drew Cain (Cameron Mathison) are planning to merge Aurora Media and ELQ. And although both Drew and Michael asked her not to get involved, Carly ignored them and invested heavily in Aurora. If something goes wrong and the merger doesn’t take place, Aurora Media could lose a lot and so could its investors, including Carly. Without Sonny’s money to back her up, Carly could be forced to sell her part of the Metro Court as well as the entire building!

If that happens, look for Nina to take advantage of the situation. She could buy the Metro Court in secret. This would mean that Nina would now be in possession of one more thing that once belonged to Carly. Carly and Sonny have divorced and Nina and Sonny are beginning to see what a relationship for the two of them looks like in Port Charles. If Nina ends up with both Sonny and the Metro Court, Carly will go on the warpath.

Carly still has one piece of information that could change Nina’s life forever. Carly knows that Nina is Willow Tait’s (Katelyn MacMullen) biological mother and has kept that information secret. Carly has reasoned that it’s better if Willow never knows that Nina is her mother since at the moment the two women hate one another. But the truth is that Carly just wants to hurt Nina and keeping Nina away from her own daughter is something that Carly can hold over Nina’s head, even if Nina has no idea. But Carly should know that the truth will come out, and then she may lose everything!

Will Nina be forced to move the Crimson Offices? Or will Nina somehow manage to put one over on Carly? Will the war between these two women ever end? Anything can happen in Port Charles so stay tuned to General Hospital airing weekdays on ABC. And don’t forget to check back right here regularly for all your General Hospital news, information, and spoilers!

Days Of Our Lives Spoilers: Jan Thinks She Has A Future With Shawn