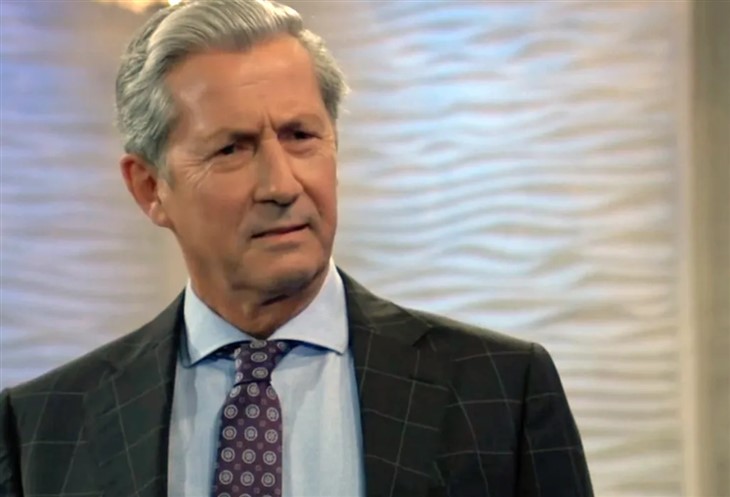 General Hospital spoilers and rumors tease that Victor Cassadine (Charles Shaughnessy) will put a target on Esmé Prince’s (Avery Kristen Pohl) back whether Nikolas Cassadine (Marcus Coloma) likes it or not. Victor has made a decision and he cannot allow the scheming teen to be a danger to his family any longer.

Victor was livid when he found out everything that Esmé had done to Nikolas, Spencer Cassadine (Nicholas Chavez) and Ava Cassadine (Maura West).  He wasn’t real happy that Nikolas did the dirty dance with her, as a matter of fact he was appalled; now that’s another Cassadine family mess to clean up. Victor has made a decision that he knows what is best for his family, and as the family patriarch he’s putting a target on that spawn of satan.

Victor isn’t far off thinking of her as a spawn of satan, considering her birth father is Ryan Chamberlain (Jon Lindstrom). But Esmé has caused his family enough trouble, and he is going to rid them of her permanently.

Some time back, Spencer had requested that Victor look into Esmé’s past, and it is possible that he found out Ryan is her father. He has been busy with many other things, including trying to eliminate Laura Collins (Genie Francis). She had started an action against him to have him deported on the grounds of moral turpitude, and he couldn’t have that. He has too much important Cassadine family business to attend to in Port Charles; so if he has found out about Esmé’s parentage he hasn’t said. Victor has been trying to unite the Cassadines against a common enemy, although he has not yet divulged exactly who that is, either.

Victor has a large network of henchmen loyal to him all over the world, and many of them former WSB agents still loyal to him. Victor was the head of the WSB about fifteen years ago and then was presumed dead in an explosion of the Crichton-Clark clinic after Liesl Obrecht (Kathleen Gati) shot him. The Cassadines all seem to have a way of returning from the dead, in Helena Cassadine’s (Constance Towers) case, the really really dead.

It will be nothing for Victor to assign one of his henchmen to take Esmé out, and to him it will be doing the world a favor-and he may be right. If Esmé is this dangerous at only eighteen, think what she might be in a few more years.

GH Spoilers – A Sniper And A Parapet

Esmé will be in a showdown possibly to the death with Ava, who will not allow her to leave town without paying for framing Trina Robinson (Tabyana Ali). Victor knows about this also, Nikolas having told him everything he realized she had done. Nikolas will race back to Wyndemere Castle to save Ava as Trina’s trial is still going on, and Victor may have the perfect opportunity to take out Esmé then. It may be a simple matter of a sniper with a gun pointed at the parapet where Ava and Esmé are struggling, and as soon as there’s a clear shot-boom!