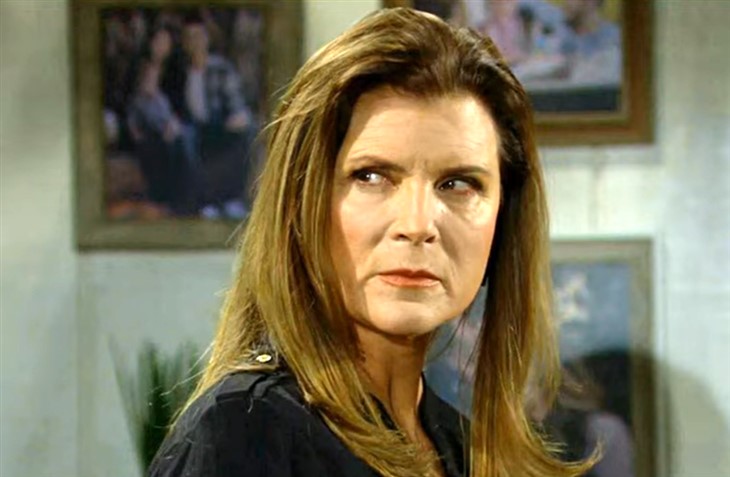 The Bold and The Beautiful spoilers and updates tease that Sheila Carter (Kimberlin Brown) will flee to Deacon Sharpe’s (Sean Kanan) place for refuge. Will Deacon believe her crazy story and hide her out?

The Bold And The Beautiful Spoilers – Deacon Sharpe’s Moved Up

It looks like Deacon’s finally moved up from the Il Giardino broom closet and moved into a modest apartment of his own, and Sheila has to find somewhere to hide out. Sheila was so busted, even though she wouldn’t face murder charges when Dollar Bill Spencer (Don Diamont) with Li Finnegan (Naomi Matsuda) in tow came through the door of Li’s place. Li and her adopted son, John “Finn” Finnegan (Tanner Novlan) had a joyous reunion but Sheila had to split the scene.

Sheila is always desperate, but she is probably more desperate than usual considering she’s been made by Li who says Sheila ran her off the road. No one ever believes Sheila, after all, but at least Deacon was her friend in the past, and Finn rejects her even though he wished it could have been different.

The Bold and the Beautiful spoilers tease that Sheila will have to come up with something believable but the truth is the least believable of all; although it will be very easy to confirm. His daughter Hope Spencer (Annika Noelle) will likely tell him once Liam Spencer (Scott Clifton) confirms it to her. Liam saw and heard Li tell the story with his own eyes and ears; what exactly will Sheila’s story be – that a crazed Li is out to kill her?

The Bold And The Beautiful Spoilers – Let Me In

Sheila literally tries to break Deacon’s screen door in as he tries to keep her from forcing her way in. Deacon had recently engaged in a little one on one friendship therapy with Taylor Hayes (Krista Allen) and Sheila had been one thing that they had talked about. Taylor couldn’t believe that she had let herself be so easily fooled by Sheila although she would have to admit Sheila came through for her saving her life.

Sheila keeps begging Deacon to let her in his place and hide her out, sure that he would come through for her like he always had. But this time it is much different; even Deacon cannot believe that Sheila’s abject grief over the death of her son had been caused by her.

B&B Spoilers – No – You Need To Turn Yourself In

Sheila can barely believe that Deacon is turning on her like Mike did; he is trying to throw her under the bus too. He won’t hide her out and he won’t even let her in his door, and is telling her to turn herself in. She tells him she didn’t kill Finn after all and he agrees that is good, but she needs help and she needs to plead insanity. That way she won’t be in a regular prison, she’ll be in a mental health facility although it too will have bars. Sheila pleads, she cajoles, she cries, she accuses Deacon of abandoning her, it makes no difference. Deacon is not making himself her accomplice in anything ever again.