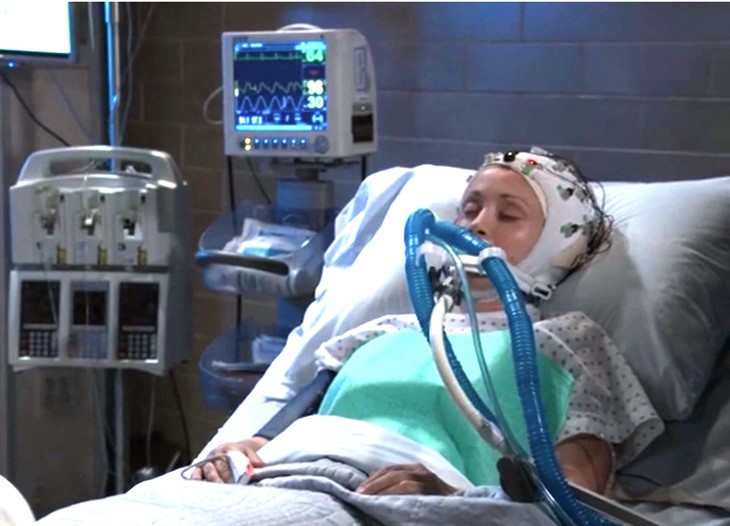 General Hospital spoilers tease that Lulu Spencer (Emme Rylan) will wake up from her coma just in time to put Dante Falconeri (Dominic Zamprogna) to find himself in a romantic bind in future episodes of General Hospital!

General Hospital viewers will recall that after the explosion of The Floating Rib that seriously injured Lulu and killed her would-be fiancé Dustin Phillips (Mark Lawson) Dante didn’t hear her say she still loved him as she suddenly passed out in the General Hospital chapel where he’d found her when he’d gone to pray. However, in some previous conversations with Maxie Jones (Kirsten Storms) about “hot Dustin” she admitted she still loved Dante and she wasn’t going to say yes when Dustin proposed.

Dustin had proposed and had a ring and everything when The Floating Rib blew up and was a total loss. Dev Cerci (Ashton Arbab) was killed, and Sonny Corinthos (Maurice Benard) and Jason Morgan (Steve Burton) had taken off later after Julian Jerome (William DeVry) who basically had been Cyrus Renault’s (Jeff Kober) patsy! General Hospital viewers will recall that Julian had no idea when he was calling Cyrus on a cell phone that he was really detonating a bomb! This led to Julian’s death and Sonny’s presumed death for several months, and very nearly his real death in a similar situation at the Tan-O!

General Hospital viewers will recall that Lulu’s name has kept popping up in scenes lately, with her mother Mayor Laura Collins (Genie Francis) having left Port Charles to spend time with Lulu at the clinic in New York City where she had her transferred. This clinic specializes in cases like Lulu’s, who has been in an indefinite coma due to her head injuries when The Floating Rib exploded. Longtime General Hospital viewers will recall that Laura herself was in a coma for several years, although hers was a catatonic coma due to mental and emotional trauma, not physical trauma like Lulu’s. Lulu’s case is much more similar to Jason Morgan’s (Steve Burton) traumatic brain injury he suffered years ago trying to stop a drunken AJ Quartermaine (Sean Kanan) from driving.

General Hospital viewer s will recall that recently, Maxie talked about what had happened to Lulu to Dr. Austin Gatlin-Holt, (Roger Howarth) the doctor who delivered her baby in the woods. She filled Austin in on Lulu and Dante’s romance and how Brook Lynn Quartermaine (Amanda Setton) had tried to break them up years ago. Maxie also told him how nothing could come between Dante and Lulu and that they were meant to be.

General Hospital viewers will recall that Maxie told Austin about the late Dustin Phillips (Mark Lawson) and how Lulu confided to her before her unfortunate head injuries that she still loved Dante and had planned to break up with Dustin. Lulu knew “hot Dustin” as Maxie had nicknamed him was getting serious and was going to propose, but still loved Dante, and Maxie assumed Lulu never had the chance to tell him.

GH Spoilers – Dante Falconeri Assumes Lulu Spencer Moved On, So He Is

General Hospital viewers know that since Dante didn’t hear what Lulu said before she collapsed, he was left assuming she’d moved on, even though she didn’t know yet that Dustin had died. General Hospital viewers will also recall that Dante talked about that with Sam McCall (Kelly Monaco) who he is falling in love with, and the feeling’s mutual. They have gone off on a mission to find her ex-husband and baby daddy Drew Cain (Cameron Mathison) who had been presumed dead for a couple of years until he made a call to her.

The two put their cards on the table, and both assured each other that they were over their previous loves – although Sam didn’t mention Jason Morgan (Steve Burton) who she’d more recently been married to. She has a son with Jason and a daughter with Drew, and Dante has a son with Lulu. Now that Dante is moving on with Sam, it is the nature of soap opera writers to make things really complicated, and bringing a healed Lulu back into the middle of Dante and Sam would certainly do it!