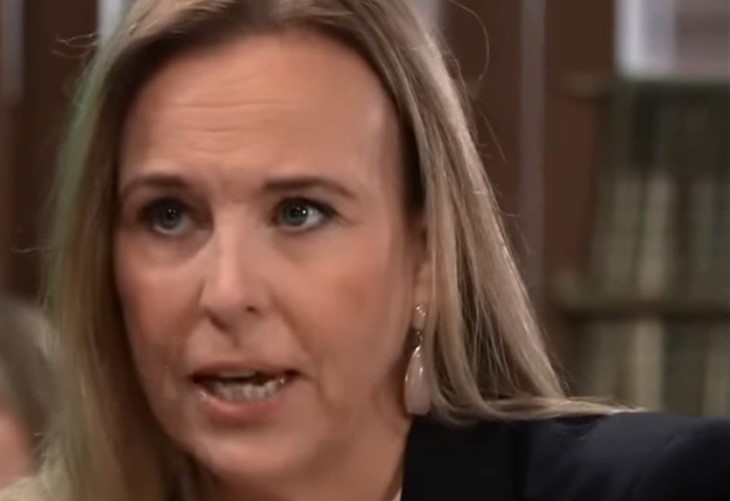 General Hospital spoilers and updates tease in this week’s GH Sneak Peek a whole group of Mayor Laura Collins’ (Genie Francis) friends and supporters gather to save her hide! This is from the upcoming 15,000th anniversary Laura-centric episode!

Laura’s mayoral office is under attack by a powerful political opponent, and it’s obvious that she is very worried as she talks to her husband outside his office at GH. A tearful Laura says “hi” and Kevin tells her he was just coming to get her and asks how she’s doing; she says she’s so nervous she’s feeling sick! Kevin puts his arm around her and says to come with her, they walk to a more private area down the hall.

Kevin tells Laura to listen to him – she doesn’t need a tidal wave of votes to know that she’s loved; reminding her she’s surrounded by people who love her. One of them is looking her in the eye right now; Laura takes a deep breath, and says not to make her cry – it’s not a good look for the mayor!

Kevin asks Laura if she’s ready, and takes her to a closed meeting room, assuring her she’s got this as he walks her through the door. Laura tells the roomful of people gathered “good morning, everyone” as most of the prominent citizens of Port Charles are there in her support.

Her high school sweetheart and first husband, Attorney Scott Baldwin (Kin Shriner) welcomes her to the “first meeting of the committee to save Laura’s hide!” Scotty is flanked by Robert Scorpio (Tristan Rogers) and Mac Scorpio (John J. York) and Carly Corinthos, (Laura Wright) and Alexis Davis (Nancy Lee Grahn) are there. Curtis Ashford (Donnell Turner) and Sam McCall (Kelly Monaco) are also in the room; Sonny Corinthos (Maurice Benard) is absent but that is probably because Carly is there.

This political challenge obviously has Laura shook up, although her opponent is not named in the promo; Laura has been through much worse than a lack of votes in her life! The episode promises to cover a lot of her life, but this scene is showing Laura how much Port Charles loves her; from a troubled teenager to a strong leader! Laura leads her constituents with grace and a caring heart, yet she pulls no punches and takes no victims.

When she first became mayor, General Hospital spoilers show she did have a little help from a tween-aged Spencer Cassadine (then Nicholas Bechtel) hacking the voting machines! But that secret by now has disintegrated in the Port Charles harbor, along with the box of ballots he threw into the harbor!

The last time Laura ran for mayor she was up against Ned Quartermaine, (Wally Kurth) who is more concerned about ELQ shareholders’ votes this week on GH. He conceded the race to Laura much more gracefully than he’s conceding to the ELQ/Aurora Media merger, so it’s definitely not Ned who is opposing her. Longtime viewers will remember her late husband Luke Spencer (Anthony Geary) was also Port Charles mayor and she was first lady of Port Charles back in the day. One thing is certain, if she’s short on votes, she’s certainly not short on love!

Have 90 Day Fiancé Stars Emily & Kobe Had Another Baby?