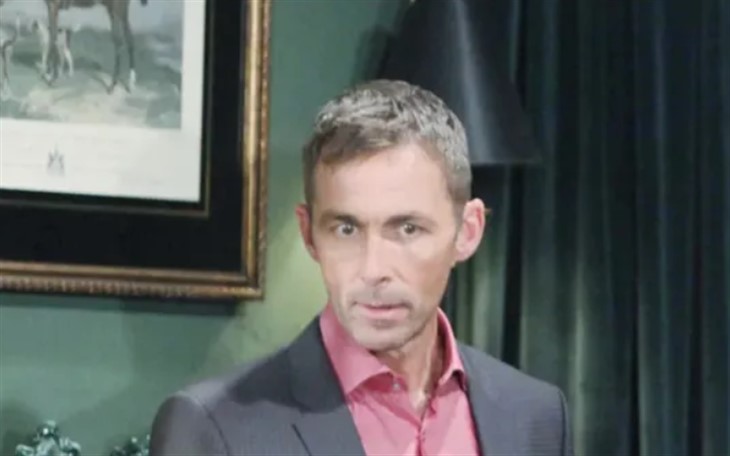 Valentin would really prefer to get out from under Victor’s thumb and be able to get back to his own life as an “unattached Cassadine”! Family loyalty is one thing, but if the truth be told, the reason Valentin put Charlotte Cassadine (Amelie McClain) in a foreign boarding school is to keep her safe from Victor! Victor did save Charlotte from Peter August (Wes Ramsey) but if he hadn’t been locked in the back of Victor’s SUV she never would have been kidnapped!

Valentin gets a text to meet Victor in the park, and it’s important; he’s been trying to dodge him but this tie he can’t. Valentin begrudgingly goes to the park to see what Victor wants!

It seems since Victor was unable to make Drew Cain (Cameron Mathison) his soldier to regain the Ice Princess technology, he roped Valentin into doing it instead. Valentin got the Ice Princess all right – but made sure that he framed Jennifer Smith (Holly Gagnier) as the thief, with the Ice Princess going to the WSB! Valentin is dreading the confrontation that surely is coming, as to whether the French Polynesia mission was successful or not; Victor can’t find out that Valentin was a double agent! Valentin doesn’t trust what Victor would have done with the technology, that he would not have tried to finish what Mikkos Cassadine (John Colicos) started! Valentin has to out Cassadine another Cassadine in order to keep the world safe and he’ll play dumb about not knowing that a team of WSB agents were there!

Valentin and Anna Devane (Finola Hughes) are getting closer and closer and it’s difficult to keep secrets from her; he knows if she were to find out she’d be done. He considers coming clean and telling her the whole thing, that he’s working with his father but yet working against him secretly! But she might understand the double agent part of it, since he knows she did double agent work infiltrating the DVX in her past and this is very much like that.

Valentin has been trying to find out what Victor is really up to and also try to prove Mayor Laura Colllins’ (Genie Francis) suspicions. Valentin too thinks that Victor is behind the murder of Luke Spencer (Anthony Geary) but only by getting him to trust him with secrets-and that’s no easy task!

Valentin knows it’s a hit or miss proposition when it comes to acting the double agent with Victor; one problem is that he still has many double agents of his own. There are many still in the WSB who are plants and Valentin’s not even sure if the ones Anna teamed with in French Polynesia are some of them!  But Martin Grey (Michael E. Knight) has shared his sister, Laura Collins’ (Genie Francis) plans with Valentin, knowing he’s not working with Victor completely willingly. Valentin knows he will be walking a very fine line if the immigration agents show up in the park to take Victor into custody for deportation. He makes sure his own papers are in order since he, too, was born in Greece-he doesn’t want to be deported too!