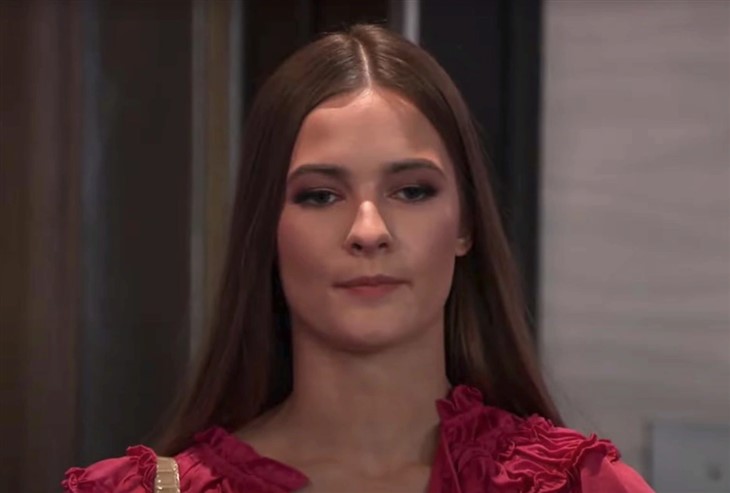 General Hospital spoilers and updates tease that Esmé Prince (Avery Kristen Pohl) will snoop in an upcoming episode of GH! She’ll spot Ava and Nikolas Cassadine (Maura West, Marcus Coloma) meeting with Scott Baldwin (Kin Shriner) so of course she has to find out if it’s about a divorce!

The breakup and divorce of Ava and Nikolas is Esmé’s plan, prodded by her dear demented daddy Ryan Chamberlain (Jon Lindstrom); now that she and Nik had a naked romp. That was also part of Ryan’s plan to ensure Ava would kick Nikolas to the curb and never forgive him; although he was upset that Esmé didn’t brag to Ava. Esmé hopes to have more secret trysts with Spencer Cassadine’s (Nicholas Chavez) father while pretending to love Spencer and playing along with him like she’s sure he’s playing along with her!

Nikolas, however told her what happened between them can never happen again-but Esmé thinks she’s got it covered. However, she’s missing some important details about Nikolas and Ava that took place in a conversation after she left the castle.

What Esmé doesn’t know is what Nikolas and Ava discussed after she left Wyndemere Castle that day; Nikolas indeed did ask Ava for a divorce. Ava was shocked and couldn’t believe her ears after she wanted to make up, but then he explained he wanted to divorce so they could remarry with a fresh start! Their marriage was with conditions and pre-nuptial contracts, although they themselves voided them long ago when they consummated their business arrangement marriage. When she sees Ava and Nikolas talking with Scott it probably is a discussion about a divorce, but not for the reasons she would think it is. First, they may have to clear up a lot of red tape!

General Hospital Spoilers – Esmé Prince Gets Up Close, But Unobserved

Esmé is able to get up close, but unobserved as she has inherited stalking skills from her father, apparently they are genetic; she wants to make sure it’s divorce being discussed. Undoubtedly she will face some challenges trying to report back to her father, seeing his brother got her fired from Spring Ridge and banned! But if Nikolas divorces Ava, there’ll be no more talk of their love nest being disturbed – she’s sure it’s just a matter of time before she’ll have him to herself!

Esmé hears bits and pieces, just enough to hear the words divorce and new start but she thinks Nikolas wants a divorce from Ava and have a new start with her! She grins to herself like a Cheshire cat, very well pleased with herself!

Esmé should learn the meaning of the word “assume” – the meaning made up of the letters spelling it out! She will be making a fool of herself and asking for trouble; she’ll find out Ava’s not moving out and she’s sharing Nikolas’ bed! In the meantime Esmé is still playing a string along game with Spencer, not knowing that he is playing one with her, and Victor Cassadine (Charles Shaughnessy) is investigating her past! Unfortunately, or perhaps not, Esmé is headed for a destination she didn’t expect, and it won’t be as the new mistress of Wyndemere Castle!