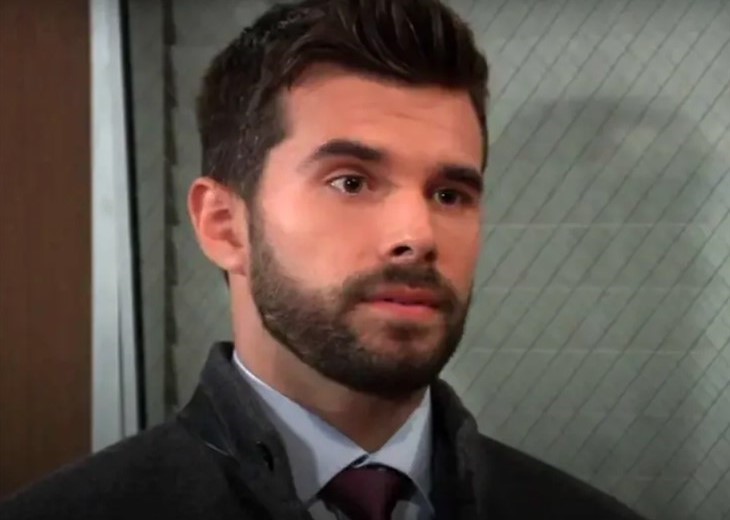 General Hospital spoilers and updates for Monday, June 27 tease a tension filled aftermath and fallout after the ELQ Shareholders’ meeting on the next GH!

General Hospital Spoilers – I Will Do Whatever It Takes..

The fallout doesn’t sound good for Harrison Chase (Josh Swickard) after he left the meeting he was called to by Port Charles Police Commissioner Jordan Ashford (Tanisha Harper)! While Linc Brown (Dan Buran) did agree to Jordan not to press charges against Chase for slugging him, he does want him to lose his job! Linc will be filing a formal complaint which might result in Chase’s termination! Linc told Jordan he wants Chase to be fired from the Port Charles Police Department and he’d do whatever it took to make that happen!

Brook Lynn Quartermaine (Amanda Setton) feels responsible for his problems and showed up at the Port Charles Police Station as he left Jordan’s office. Now they are sitting together at a table at Kelly’s, and Brook Lynn is quite sincere when she tells him she’ll do whatever it takes to get him out of this!

GH Spoilers – Why Are You Choosing To Be Where You Are Not Wanted?

At the Metro Court pool, Olivia Quartermaine (Lisa LoCicero) confronts Nina Reeves (Cynthia Watros) as she sees her appear, and she makes sure Nina knows that she is not welcome! Olivia asks Nina why is she choosing to be where she is not wanted, definitely driving the point home! Olivia is firmly on Carly Corinthos’ (Laura Wright) side when it comes to Nina, blaming her for splitting up Sonny Corinthos (Maurice Benard)’s family. Nina doesn’t respond to Olivia’s challenge, yet – but she’s not known to just let others walk over her anymore!  She’s not the timid pushover that she once was years ago!

General Hospital Spoilers – Shall We Have A Show Of Hands?

At the Quartermaine mansion, Valentin Cassadine (James Patrick Stuart) addresses the meeting of the sour patch kids, namely a dour Drew Cain (Cameron Mathison) and Michael Corinthos (Chad Duell)! Lucy Coe (Lynn Herring) had cast the deciding vote on the ELQ/Aurora merger that Drew and Michael thought they had in the bag – with Ned Quartermaine (Wally Kurth) on Valentin’s side! Valentin announced that the rumored ELQ/Aurora Media merger was not going to happen!

Now he asks Drew and Michael if they should have a show of hands, and make it official?! That is what happens when the younger men try to push the older ones out of an organization; they don’t get their support!

GH Spoilers – Who Stopped It?

Back to The Metro Court Pool, someone has obviously told Sasha Gilmore Corbin (Sofia Mattsson) about the merger being stopped, which of course was by Valentin and Ned with Lucy’s tiebreaker. She asks someone who stopped it, and it looks like Olivia will face off with Sasha as well as Nina and it might get just a bit ugly! Elsewhere, others closely involved in the would-be merger and the outcome of the shareholders’ meeting are still oblivious to what took place! There will be some shock and dismay when the other would-be power players have to deal with the aftermath, especially one certain person who just finished bragging to her ex-business partner!

General Hospital Spoilers – Our Family’s Future Is Brighter Than Ever –

That certain person is Carly, who now is bragging to her daughter Josslyn Jacks (Eden McCoy) and mother Bobbie Spencer (Jacklyn Zeman)! She tells them their family’s future is brighter than ever, obviously not having been informed that the merger didn’t go through, meaning she’s lost her half of the Metro Court! Carly will have thirty days to get her half of the hotel back but who exactly IS “Stillwater Venture Group” who she sold it to?

For all she knows she could have sold it to Valentin or even Victor Cassadine (Charles Shaughnessy)! Or, quite possibly another investor who doesn’t have her best interests at heart!

GH Spoilers – Leave Him Out Of This!

As Olivia is confronting Nina and Sasha, suddenly Willow Tait (Katelyn MacMullen) shows up and she is not happy to say the least!  She is certainly there with news about what happened with the now cancelled merger and looking for Carly, but she winds up in the confrontation with Olivia, Sasha and Nina! Nina must bring up Wiley Corinthos (Viron Weaver) as Willow is livid as she shouts “leave Wiley out of this”! It sounds like what happened at the shareholder’s meeting is already having far reaching consequences; perhaps the “Stillwater Investment Group” is owned by Nina!

General Hospital Spoilers – Are You Sure He Got The Message?

Then again, the “Stillwater Investment Group” could be Sonny’s; at the garage, Brando Corbin (Johnny Wactor) is asking Sonny if he’s sure someone got the message! That would be quite a message if Michael’s merger didn’t go through because Sonny bought half of the Metro Court from Carly and then gave it to Nina! What was that about karma being a bitch and what goes around comes around? However, it’s far more likely they’re discussing Dex (Evan Hofer) since Sonny tells Brando he and Dex have to get along!