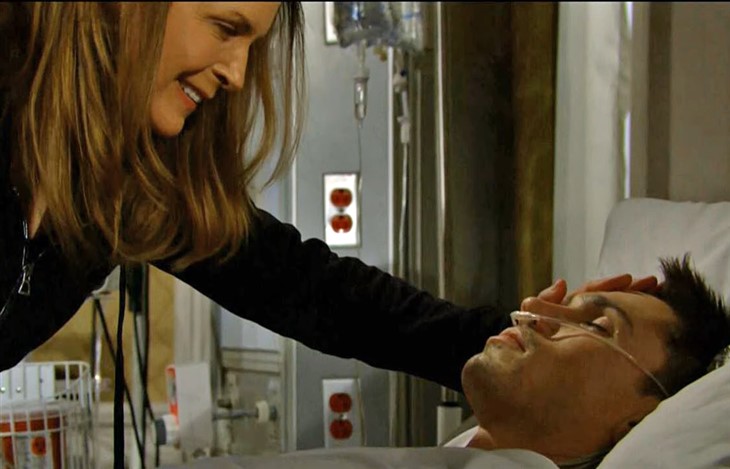 The Bold and the Beautiful (B&B) spoilers reveal that Li Finnegan (Naomi Matsuda) died after being hunted down by Sheila Carter (Kimberlin Brown). With Sheila in charge of John “Finn” Finnegan’s (Tanner Novlan) care, how will the doctor reunite with Steffy Forrester Finnegan (Jacqueline MacInnes Wood)? Could Finn trick Sheila and escape to find Steffy?

The Bold And The Beautiful Spoilers – Li Finnegan’s Death

B&B spoilers reveal that Li risked her career and freedom to save Finn. Doctors wanted to pull the plug as Finn’s chances of survival were extremely slim. Instead of fighting doctors about that, Li decided to take charge of her son’s care. While fans are happy that Finn is alive, they aren’t pleased with Li keeping this a secret from Steffy.

Just when Finn was showing signs of waking up, Sheila escaped prison. Sheila showed up at Li’s hideaway and learned Finn was still alive. Unfortunately, Li’s daring move would be fatal. After being hunted down by Sheila, Li lost control of her car. Right before plunging into the water, Li’s vehicle caught on fire.

With Li dead, Sheila will take control of Finn’s recovery. Sheila knows that if she takes Finn back to the hospital, there will be a lot of questions. Sheila also knows that she will be taken back to jail. Sheila might not be guilty of murdering Finn, but she has several attempted murder charges that could still leave her behind bars forever. Plus, Sheila is responsible for Li’s death.

Sheila will try to keep Finn alive with the help of Mike Guthrie (Ken Hanes). Once Finn wakes up, Sheila will have a lot of explaining to do!

The Bold And The Beautiful Spoilers – Tricking Sheila Carter

The Bold and the Beautiful spoilers reveal that Finn could take a page out of Li’s playbook. Just as Li tried to trick Sheila, Finn might do something similar. Finn could pretend to be Team Sheila in order to gain her trust. Finn might even convince Sheila that he can get Steffy to “understand.”

Of course, it’s also possible that Finn will pretend to still be comatose. While Sheila isn’t looking, Finn could work on getting himself strong enough to escape.

Wood is supposed to return on-screen on July 4, 2022, but “SINN” won’t reunite until the week of July 25. Of course, preemptions could push this episode back.

However, what we know is that there have been explosions, a yacht, and a helicopter while filming in Monte Carlo. Plus, Ridge Forrester (Thorsten Kaye) and Taylor Hayes (Krista Allen) vow not to let Sheila escape justice. There is also the summer promo, which teases that Steffy is coming for Finn.

So, could Finn escape Sheila’s clutches and find out that Steffy is in Europe? This could have Sheila running after him, which would explain all the explosions and at least one helicopter in Monte Carlo. How will Sheila be stopped – for good this time?