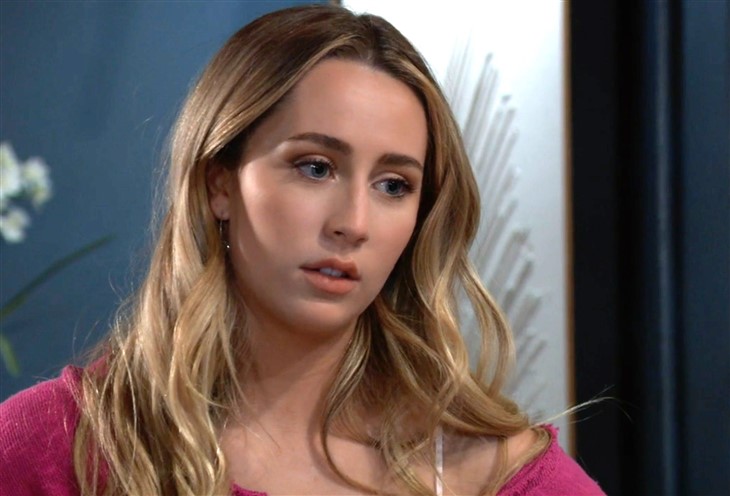 Joss is urgent to find Dex, worrying about him and obviously attached to him, having scoured social media and no way to contact him. She has her suspicions that Sonny’s sent Dex to the pine barrens, telling Michael she thinks she knows why no one’s seen him.

At Charlie’s Pub, Victor is upset as he issues a well-intended warning to Nikolas Cassadine (Marcus Coloma). Victor warns Nikolas that he doesn’t want to put that to the test, likely referring to his signed confession to Ava that he killed Esmé Prince (Avery Kristen Pohl). After all, Victor knows that Ava could turn that around and it wouldn’t be in Nikolas’ best interests if she handed that over to the PCPD. It wouldn’t matter that no body had ever been found or evidence that Esmé’s dead, considering the district attorney Robert Scorpio (Tristan Rogers) hates Cassadines.

Ryan Chamberlain (Jon Lindstrom) receives an unexpected visit at Spring Ridge when Ava shows up, and it’s probably difficult for him to remain “locked-in”. Ryan has been faking his locked-in syndrome for over two years now, and Ava makes an unexpected statement to him as well. Perhaps he’s asked Ava in his blinking code about Esmé, which would be a bad move on his part since he’s not supposed to know much about her personally.

Esmé was just supposed to be his therapist at Spring Ridge who took over for the late Harmony Miller (Inga Cadranel). Ava tells Ryan that she overstayed her welcome, and she’s gone – who else could she be referring to besides Esmé?

Dante Falconeri (Dominic Zamprogna) discusses the Diane Miller (Carolyn Hennesy) case as he likely tells Sonny Dex is clear as a suspect in the hook attacks. Diane will identify her attacker as a woman although she may not be able to give a name. Dante was questioning Sonny previously about Dex, wanting to know where his employee was – he was in the freezer hanging from a rack at Pozzulo’s. Sonny tells Dante that he’ll do whatever he has to do to make sure Diane gets justice.

Still in Jacksonville, Carly Corinthos (Laura Wright) confides in Drew Cain (Cameron Mathison) obviously blaming herself for something. Perhaps Peyton Honeycutt’s (Linda Purl) guilt trip about Carly never visiting her adoptive mother’s grave got to her, or she’s blaming herself for her children being in danger again. Drew grabs her by the shoulders very emotionally, and wants to know why she’s still blaming herself?

He told her she’s safer where she’s at and her children are being protected by Sonny’s men, not to mention the PCPD. Dante’s not going to leave them unprotected; if it’s the cemetery she’s worried about Drew assured her they’d take care of that.